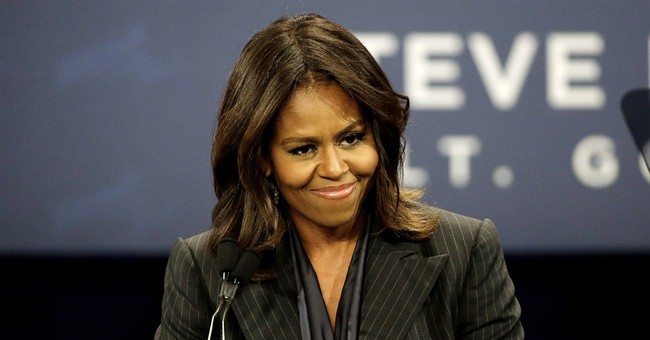 With President Obama “benched” by his party due to his low approval numbers, Michelle is the only option left for the White House. This chart pretty much sums up why she’s travelling the country stumping for Democrats ahead of Election Day; she plans to head to Iowa later on Friday and help out Rep. Braley’s campaign as well. In the meantime, Schauer made a stop in Saginaw for a get out the vote rally.

The Snyder campaign and the Michigan GOP have also released two new ads; Snyder’s pushes back against his education policies, while the Michigan Republican Party hits Schauer over Obamacare.

Lastly, while there is a huge gender gap in some of the 2014 races, especially in North Carolina; the gender gap in this gubernatorial election isn’t that bad. In a Vangaurd and Denno Research poll, Schauer leads Snyder with likely women voters 43/36; a 7-point deficit isn’t good, but it’s not bad either. It’s enough to keep Snyder ahead in the polls, which Vanguard and Denno have him up 3, but other polls have Snyder leading by a larger margin.

Regardless, these polls could all change in the coming days as the debate between Snyder and Schauer begins on October 12.

UPDATE: Michigan GOP had this to say about First Lady's visit to stump for Schauer:

An upcoming visit from First Lady Michelle Obama says only one thing about Democrats’ desperation nearing November: President Obama isn’t going to cut it. With top-ticket Democrats Gary Peters and Mark Schauer losing momentum less than a month until Election Day, Michigan Democrats up and down the ballot refuse to stand with a President whose approval rating is nearly toxic for their campaigns.

"Mark Schauer and Gary Peters are anxious to campaign alongside the First Lady, but Michigan families aren’t going to forget she’s still here on behalf of her unpopular husband, President Barack Obama,” said Michigan Republican Party Chairman Bobby Schostak. “At this point, Schauer and Peters are willing to do and say anything – including lie – in hopes of reigniting excitement for their lagging campaigns. It still won’t change the fact these two have supported policies that kill jobs, eliminated 225,000 health care plans here in Michigan, and will drag our state backwards just as their colleague Jennifer Granholm did.”

And how did I forget to include this Snyder ad touting his education policies.