MI GOV: Snyder Up 8 Over Schauer 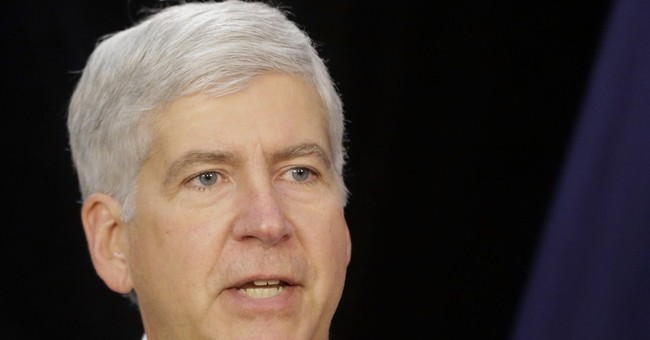 With the Michigan gubernatorial debate coming upon October 12, both Gov. Rick Snyder and Democrat Mark Schauer’s campaigns have been getting more aggressive, especially Snyder's. Yet, there seems to be confidence in the governor’s camp, as he wasn’t in attendance for Mitt Romney’s visit in Lenore last week; Romney was stumping for the rest of the Republican ticket.

According to the Oakland Press, Snyder “had a scheduling conflict. Oakland County Republican Party Chairman Jim Thienel said of Snyder’s absence: ‘I think, rather than steal their thunder, he’s allowing other candidates to shine.’”

Snyder has a good reason; he’s up 8 points over Schauer thanks to 51 percent of Michigan voters who feel their state is on the right track (via Detroit News):

The Republican incumbent held an 8-percentage-point lead over Schauer, 45 percent to 37 percent, with 15 percent of voters remaining undecided in a statewide poll of 600 likely voters conducted Oct. 2-4 for The Detroit News and WDIV (Channel 4). It is outside the survey's margin of error of plus-minus 4 percentage points.

A previous poll had Snyder up 6 points ahead of his Democratic opponent.

Nevertheless, Schauer, a former congressman, is also visible on the campaign trail. He released an ad slamming Snyder for cutting education by $1 billion, which featured teachers voicing their complaints.

Last week, Schauer nabbed the endorsement of the United Auto Workers Union (Snyder was endorsed by the Michigan Manufacturers Association) and made a stop in Saginaw; he plans to stump for votes in Lowell on October 11.  Rep. Dan Kildee will also appear with him at a get-out-the-vote rally in Flint later this week.

He also released this ad hitting Snyder for helping businesses that are well off and shipping jobs overseas. It’s a rehash of another outsourcing ad his campaign released, but its delivery seemed rehearsed and unauthentic.

At the same time, he mentioned the pension tax in the ad that could be an avenue of attack (via Detroit Free Press):

Snyder's plans relied heavily on the premise that lower taxes for businesses would create a stellar turnaround, ending the depression that gripped the state when he took office. And many of his changes made good policy sense.

But a close analysis of tax incomes shows that the cost of funding state government has shifted to those who can least afford it, and the job growth that would have justified that shift hasn't materialized.

That's a hard sell for a governor seeking re-election in a competitive race with a challenger who vows to reverse some of Snyder's most significant changes.

For some Michigan families, changes to tax credits and deductions have been deeply felt.

The state is collecting nearly $900 million a year more from individuals, many of them poor people who have lost tax credits or deductions.

Meanwhile, businesses pay about $1.7 billion less in taxes, all while job growth has slowed each year since the tax cuts took effect.

The remainder of the increase can be explained by deductions and tax credits that were either eliminated or modified significantly. For millions of Michigan residents, these were experienced as tax increases.

$270 million from a decrease in the homestead property tax credit.

$240 million from cuts to the Earned Income Tax Credit (EITC).

$200 million from the pension tax changes.

$50 million from the elimination of deductions for children.

$50 million from the elimination of the special exemption for age and unemployment compensation.

$90 million from elimination of other nonrefundable credits, such as city income tax, homeless/food bank contributions and contributions to public universities and public broadcasting.

Shifting tax burden toward individuals tends to hit the low-income population the hardest, Francis said: "High-income individuals tend to save more, those receiving the Earned Income Tax Credit pour that money right back into the economy and tend to spend locally."

Then again, it seems even with these changes to the tax codes following the elimination of the business tax, which really isn’t “a tax on fat cats,” the voters in the Mitten State seem to be crediting Snyder for his hard work–and the fact that the state is turning around, albeit slowly.

Both campaigns hold education and infrastructure as top. Snyder plans to get road funding off the ground by the end of this year (via Crain’s Detroit Business):

Estimates vary, but administration officials say between $1.2 billion and $1.5 billion more annually is needed to adequately repair and maintain the state's crumbling roads and bridges.

So far, the Legislature has resisted the idea of increasing taxes or registration fees to generate that level of revenue.

Lawmakers came close earlier this year, going late into the evening debating the issue for several nights, before leaving without doing anything to go on a months-long vacation back to their districts and campaign for re-election.

Now there are just 13 session days remaining on the House and Senate calendars before the end of the year.

"Waiting has no value. It just makes our roads worse," Snyder said.

The roughly 600 business leaders in the crowd at the policy forum in Grand Rapids agreed, voting transportation funding as the most important item that needed to be addressed in Lansing.

On the issue of transportation, 98 percent of respondents said transportation investment should be a priority, and 97 percent agreed business leaders should hold legislators accountable for a lack of investment.

Schauer agrees that road funding needs work, but wasn’t one to say whether he would take a gas tax off the table.

As the debate nears, the Snyder administration will also be watched in how they handle Ebola as the state prepares to welcome a possible patient.