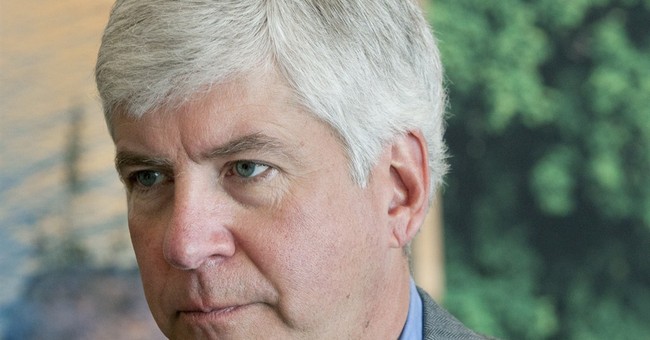 It seems like Michigan Republican Gov. Rick Snyder is pulling ahead of Democratic challenger Mark Schauer. The former congressman is trailing the incumbent Republican by six points in the latest round of polls from the Rasmussen and EPIC-MRA.

In mid-September, a Rasmussen poll of 750 likely voters had Snyder leading Schauer 47/41. Now, an EPIC-MRA poll of 600 likely voters has Snyder leading within the same margin 45/39. Moreover, while some people may disagree with some of Snyder’s policies, Michigan voters have applauded the governor for getting a hold of the budget–and that he deserves re-election. Even with the right-to-work reforms, which some have labeled union busting; some voters are apparently seeing Snyder as the better option (via Detroit Free Press):

At the end of August, Democrat Mark Schauer was up by 2 points, 45%-43%, over Snyder in an EPIC-MRA poll done exclusively for the Detroit Free Press, WXYZ-TV (channel 7) and media polling partners.

Fifty-four-year-old Joseph Parisi, of Taylor, who participated in the survey, said he doesn't like everything that Snyder has done, but on balance he deserves to be re-elected.

"He's gotten a hold of the budget. When Granholm was in office, they fought like cats and dogs over the budget," Parisi said. "And I agree with him pushing for the bridge (over the Detroit River)."

However, Parisi said he didn't like the way the right-to-work bill was passed or its end result.

"It just seems like union busting to me," said Parisi, who runs a carpet cleaning business. "But Snyder just seems to be the better choice of the two."

Overall, the Republican ticket in Michigan looks like they’re in pretty good shape, but with a little over a month left until Election Day; anything can happen.

For now, it seems Snyder is surging, but more polls in the coming weeks will determine if this is an outlier.

But as we await confirmation on that development, the National Federation of Independent Business, who endorsed Snyder’s re-election, released this ad praising Snyder for eliminating the Michigan Business Tax. Meanwhile, the Democratic Governors Association unveiled this TV spot slamming Snyder’s education cuts.

UPDATE: I forgot to mention that Snyder was endorsed by the Michigan Manufacturers Association