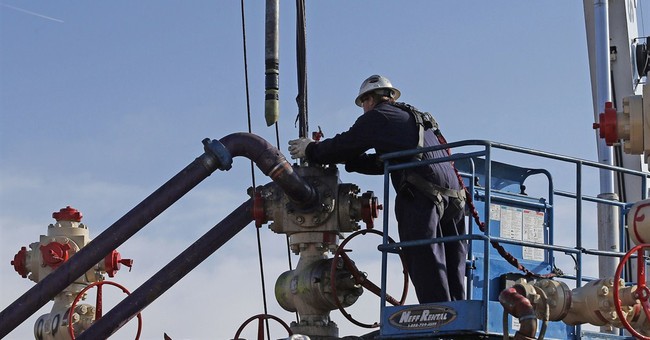 The debate is over; fracking doesn’t cause destructive earthquakes. The highly non-controversial way of extracting natural gas, which has been used since 1947, has been a focal point of some absurd claims that they’re a threat to the environment (via Associated Press) [emphasis mine]:

Man-made earthquakes, a side effect of some high-tech energy drilling, cause less shaking and in general are about 16 times weaker than natural earthquakes with the same magnitude, a new federal study found.

People feeling the ground move from induced quakes — those that are not natural, but triggered by injections of wastewater deep underground— report significantly less shaking than those who experience more normal earthquakes of the same magnitude, according to a study by U.S. Geological Survey geophysicist Susan Hough.

Fracking and natural gas exploration has been a huge issue for the environmentalists. They claim fracking contaminates water, which was disproven by the Environmental Protection Agency when they tested the water in Dimock, Pennsylvania in 2012. They said the water was safe to drink (emphasis mine):

The U.S. Environmental Protection Agency announced today [July 25, 2012] that it has completed its sampling of private drinking water wells in Dimock, Pa. Data previously supplied to the agency by residents, the Pennsylvania Department of Environmental Protection and Cabot Oil and Gas Exploration had indicated the potential for elevated levels of water contaminants in wells, and following requests by residents EPA took steps to sample water in the area to ensure there were not elevated levels of contaminants. Based on the outcome of that sampling, EPA has determined that there are not levels of contaminants present that would require additional action by the Agency.

Between January and June 2012, EPA sampled private drinking water wells serving 64 homes, including two rounds of sampling at four wells where EPA was delivering temporary water supplies as a precautionary step in response to prior data indicating the well water contained levels of contaminants that pose a health concern. At one of those wells EPA did find an elevated level of manganese in untreated well water. The two residences serviced by the well each have water treatment systems that can reduce manganese to levels that do not present a health concern.

As a result of the two rounds of sampling at these four wells, EPA has determined that it is no longer necessary to provide residents with alternative water. EPA is working with residents on the schedule to disconnect the alternate water sources provided by EPA.

Overall during the sampling in Dimock, EPA found hazardous substances, specifically arsenic, barium or manganese, all of which are also naturally occurring substances, in well water at five homes at levels that could present a health concern. In all cases the residents have now or will have their own treatment systems that can reduce concentrations of those hazardous substances to acceptable levels at the tap. EPA has provided the residents with all of their sampling results and has no further plans to conduct additional drinking water sampling in Dimock.

Dimock became the epicenter for the drinking water contamination hysteria thanks to Josh Fox’s 2010 documentary Gasland.

Right now, environmentalists and green energy advocates have to solve a few problems with their own pet projects, specifically in solar fields where 28,000 birds are bursting into flames over the intense heat emitted from the plants. Additionally, wind turbines are killing hundreds of thousands of migratory birds and turning nearly a million bats into burgers (via NRO):

California’s massive Ivanpah solar power plant can produce enough electricity for 140,000 households — but the environmental cost is nothing less than an avian slaughter.

Temperatures near the towers can reach up to 1,000 degrees Fahrenheit, heat certainly sufficient to fry a fowl.

That’s a common occurrence, the AP continues; federal investigators saw a bird burn roughly every two minutes. Ivanpah owner BrightSource estimates that “about a thousand” die each year, and one environmental group says the plant kills up to 28,000 birds each year.

Ivanpah isn’t the only green darling with a lot of bird blood on its hands, either. The American Bird Conservancy estimates wind turbines slay 440,000 birds each year, and the an analyst writing in the Wildlife Society Bulletin says it’s closer to 573,000 — in addition to 888,000 bats.

So, does this mean we should all live in teepees?