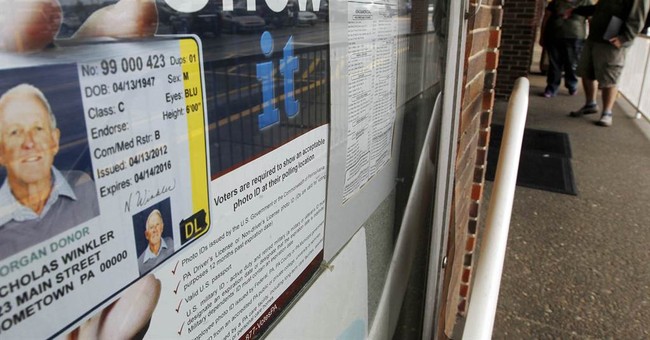 Well, it wouldn’t be a liberal conference without liberals discussing voter rights and voter ID legislation that they allege is being used to suppress the vote. Jess McIntosh, the communications director of EMILY’s List, moderated the panel, which was filled by Ohio State Senator Nina Turner, Maggie Toulouse Oliver, and Jocelyn Benson. All three women are running or ran for the position of Secretary of State. Nina Turner is the current Democratic candidate in Ohio; Oliver is running in New Mexico; and Benson ran for the office in 2010 in Michigan.

McIntosh noted that there have been efforts to curb voting rights before, but we’re, or shall I say liberals, are seeing a full-blown assault on voting rights since the 2012 election.

Benson noted that this battle in our democracy (we’re a constitutional republic) has always existed in American society since our founding; it’s just taken different forms. The power this office holds was on display during the 2000 presidential election under then-Florida Secretary of State Katharine Harris, which elicited disgust, even hisses, from the audience when Benson mentioned her name.

It shows “how important this one office is to ensuring that democracy works the way it’s supposed to,” she said.

“If we leave you with anything here today, I hope that we leave you the the recognition that each of you have a responsibility to make sure these offices are not just another office on the ballot in this year’s election or in future elections, but are ones that are taken seriously and that we talk about as very, very powerful positions for ensuring that every other issue we work on actually is able to come to fruition through the democratic process.”

Oliver said when she became Bernalillo County Clerk in 2007, her first goal was to make sure the office functioned properly. After all, Bernalillo is the most populous county in the state; the county seat is the city of Albuquerque.

After getting her office in order, Oliver said it was necessary to give her residents more opportunities to cast their ballots in elections.

On the alleged assault on voter rights, Oliver described it as “an insidious thing because it takes the form of trying to win at the expense of people’s personal civil rights.” Hence why she decided to run for Secretary of State, saying “I’m running against a current incumbent who has been sort of taking the mantra, or carrying the mantel forth of [John] Husted and [Scott] Gessler and some of these other bad guys and really replicating those same things, only they look a little bit different in my state, but it’s basically the same idea: let’s keep people from casting ballots.”

For Nina Turner, it’s all about protecting the “greatest equalizer” in our society. She described how voting no longer comes with any obstacles regarding race, sex, and socioeconomic status. But she’s running to become Ohio’s next Secretary of State to stop the wave of voter suppression happening across the country, which she decried as “immoral.” She said Republicans “subscribe to a mantra of if we can’t beat them, cheat them.”

When it comes to the issue of access to voter materials, like being able to register to vote, Oliver noted how there are kiosks in New Mexico’s Department of Motor Vehicles where you can register to vote after waiting a millennia for your driver’s license. Not many people have participated.

In Ohio, Turner listed occasions where voting rights are being suppressed. The state legislature took away “golden week,” where one could register and vote at the same time. Ohio residents are now unable to participate in Sunday voting, where African-Americans would go to early voting locations after services to cast their ballot. Why? Because African-Americans tend to vote Democratic, said Turner, remember, “If you can’t beat them, cheat them.”

Another example of voter suppression she gave was the Cincinnati Board of Elections’ decision to move the early voting location outside of the city. By bus going one-way, it took ninety minutes, but it gets worse; you had to walk a half-mile from the bus stop to the polling location. Turner pointed out the obvious: this would be devastating to people who are public transportation dependent.

She said the video is somewhere in the archives of MSNBC; the Ed Show and the New York Times documented this development. I’ll let you troll around for that on your own.

But what about those horrible, racist photo voter ID laws?

Oliver noted how incumbent New Mexico Secretary of State – and her Republican opponent – Dianna Duran said she was pushing for such a policy to protect the integrity of the elections. Right now, New Mexico doesn’t have such a law, which Oliver hopes will remain, especially if she’s elected, but commented on how proponents of the legislation talk about this issue. They say, according to Oliver:

“We can’t trust the election process. That all of us that are going out to vote and our neighbors and our friends, that we can’t trust that it’s really them; that who they say they are that are going to the polls and therefore we must put these – and let me be perfectly frank – these sort of new Jim Crow laws in place, such as photo voter ID, such as rolling back early voting etc. etc. that’s what it is.”

On voter fraud, Oliver insisted, “this stuff hardly ever happens” and that attempts at in-person voter fraud in her county are mythical.

My colleague Katie Pavlich wrote two years ago that UN poll watchers were “baffled” that our elections don’t require voters to verify their identity. As for concerns about people not the proper documentation, it only costs $10 for a non-driver’s license in New York (4 years) or New Hampshire. It used to be $13.50 in Pennsylvania, but their fees went up astronomically to $27.50 due to the state’s new transportation bill. That’s an issue for another time.

Why Trump Blasted the DC Mayor for the Riots Outside the White House
Beth Baumann
With Roberts' Vote, SCOTUS Shoots Down Challenge on Church Services Limits During Coronavirus Lockdown
Matt Vespa