Netroots Nation: Transgender Equality In The Military Gets Cool Reception 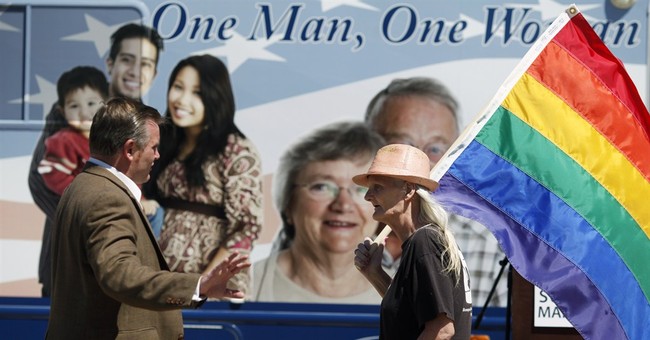 Last week, I ventured into a sea of liberalism at Netroots Nation, which was held at the Cobo Center in Detroit, Michigan. It was a buffet of liberal issues: LGBT issues, workers rights, water rights, social justice, abortion, single-payer healthcare, and many more that would drive ordinary conservatives insane.

Yet, on the issue of transgender rights, especially the right for them to serve in our military openly, the conference was less than enthusiastic as proven by the scarce attendance at this panel.

In the program given to us at the registration desk, this panel is described as such:

Today, it is outdated military policies – not the law – that ban transgender people from serving and forces their discharge if they are found out. Despite changes to the Diagnostic and Statistical Manual of Mental Disorders, which removed “gender identity disorder” as a mental illness, the U.S. military has not updated their policies. Service members are still discharged with this discredited diagnosis. Drawing on lessons learned from the campaign to repeal [Don’t Ask, Don’t Tell] DADT, and the model for open transgender service in other counties, this session will explore the path toward full equality.

So, why do transgender Americans want to serve (quietly) in an institution hostile to them?

Allyson Robinson, a transgender veteran and LGBT activist, noted that the military is still a great opportunity. It provides health care, housing, and a chance to serve one’s country. It’s a great job. She also said that good job opportunities are two to five times harder for transgender Americans to find.

The other reason transgender Americans join the military is family tradition. Robinson alluded that this was her reason for signing up, as her family had a long history of serving in the military that dates back to the Revolutionary War.

Kayla Williams, a cisgender veteran, or someone who associates with the gender assigned at birth, served in Iraq described the “austere” conditions she lived in at times during her deployment. She said she took hormonal birth control to regulate her menstrual cycle.

“No one wants to see a woman change her tampon in a sandstorm,” she said. Williams added that the military was accommodating and capable to handle her needs.

Fiona Dawson, host and producer of Transmilitary; a show about transgender military lives, served as the panel’s moderator and asked another transgender veteran, Landon Wilson, who was born female, but transitioned to male, about the military providing treatment for his needs.

“A hormone is a hormone is a hormone, alright,” he said. “When you break it down really and – trans-hormones are no different than non trans-hormones so if we have a guy in the military who was born male, lives as male, and his testosterone is low; what’s the difference in somebody who is a trans-man who’s testosterone is really low who needs that same hormone? There isn’t one.”

Dawson asked if these treatments could be taken into – and administered in – austere environments, Wilson said absolutely.

I had to leave the room due to an emergency phone call, but I was able to catch Williams declaring that “this is an incredibly important human rights issue and it’s time for everyone in the progressive community and national security community to come out and speak out on full equality for trans-personnel.”

But, as Robinson noted, this fight is different; there needs to be more awareness. She recollects how in the fight to repeal Don’t Ask, Don’t Tell, Congressman, Senators, and their staffs count the number of postcards, phone calls, and constituent visits they receive on issues. But, at the Pentagon, they couldn’t care less about constituent services.

Nevertheless, Robinson told the audience that contacting their representatives is key, as is sharing, liking, and retweeting what she, and other organizations devoted to this cause, disseminate on social media. It’s to build awareness.

“I don’t know about you, I’m constantly hearing big applause from the room across the hall, right? There’s a lot of people in that room – um, look around [observing the virtually empty room]; this is the situation that we deal with,” said Robinson.

Sue Fulton, an army veteran who graduated West Point in 1980, is also fighting to make the U.S. Military more LGBT-friendly at an organization called SPART*A. She said networking with fellow members in this community is essential. It offers a base of support, but more importantly; allows this movement to obtain facts on the ground. It allows them to get the stories and bring them – anonymously – to the people who make the decisions.

Fulton acknowledged that she was a little surprised by the amount of transgender Americans serving in the military who are coming out to their fellow comrades and commanding officers and not experiencing harsh resistance.

“There’s surprisingly less resistance – in general – than we may have expected a few years ago…there’s a growing understanding of what this is about,” she said.

The panel ended with something that has always plagued progressive/Democratic politics since George McGovern’s 1972 presidential bid; the accusation that left-wingers are anti-military and soft on defense.

Dawson noted how groups advocating for open trans-service in the military are met with anti-military and anti-war comments from transgender Americans on social media.

Robinson declared she is a proud progressive, but said, “We assume that we all think exactly the same on every issue, right? And, the fact is, of course, we don’t…I think that if we’re going to be about anything it shouldn’t be about marginalizing people, right? If we’re going to be a movement about anything, we should be a movement about – where everyone is free to talk about what they believe and to be part of what we’re doing where we have agreement.”

This may come as a shock to these folks, but conservatives are also for not marginalizing people and we love debate.

Robinson claims there are 15,000 transgender Americans serving in the U.S. Military.

Atlanta Mayor Breaks From the Dem Pack and Denounces Riots In Her City
Beth Baumann
Why Trump Blasted the DC Mayor for the Riots Outside the White House
Beth Baumann
With Roberts' Vote, SCOTUS Shoots Down Challenge on Church Services Limits During Coronavirus Lockdown
Matt Vespa