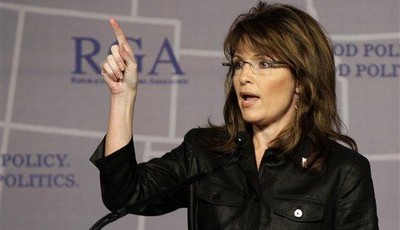 I've been a little annoyed at the recent media characterization of Sarah Palin as a purely "Social Conservative" or "Traditionalist" pitted against the "Reform" or "Fiscal Conservative" wing of the GOP.

It's not that Palin isn't a social conservative (she is), but as governor, her social positions did not define her.  It is very obvious that the media has sought to define her as a social conservative, in an effort to pigeon-hole her -- and to diminish her reputation.  What is more, aside from all-but calling her a religious fanatic, the media has sought to portray her as a Mike Huckabee-esqu populist.

In fact, Palin's pre-Veep identity was as a leading reformer and fiscal conservative … a starkly different image than most Americans are now aware of.

To pound home this point, our intern Adam Brickley (who ran the leading "Draft Palin" blog) went through his archives and put together a list of quotes about Palin from before her VP nomination.

He also put together a timeline of the fiscal conservative reforms undertaken by the Palin Administration in Alaska.

Following are some very telling quotes about Palin, which pre-date her nomination:

"Republican primary voters in Alaska are ready for a change and are rallying to the fiscally responsible leadership embodied by Governor Palin."

"(Palin) has come out and told her own congressional delegation, all Republicans, 'Stop with the earmarks! It's wrong, it's wrong! Even when it benefits us in Alaska.'"

"This week, it was Palin who singlehandedly killed the leading symbol of Republican spending excess in Washington: the Bridge to Nowhere."

March 23rd, 2008 – More vetoes in the "supplemental budget". Palin also demands that legislators explain their pork projects to her personally before she signs off on any of them. This issue was particularly hilarious because the budget was for "emergency spending" and it included (among other things) the construction of batting cages and gun ranges.
May 24th, 2008 – Second consecutive year of huge line-item vetoes in the state's capital budget (over a quarter-billion dollars this time, 10% of the total capital budget):

I'd say that's a pretty impressive record of "Reform" and "Fiscal Conservatism".  (Of course, these headlines are a stark contrast from what we've been fed these last couple of months.)

So if your one of those people who incorrectly believes Palin is merely a populist religious conservative, I have some beach-front property in Arizona that you might be interested in.