A Reinvigorated McCain Talks to Bloggers Before NH Primary 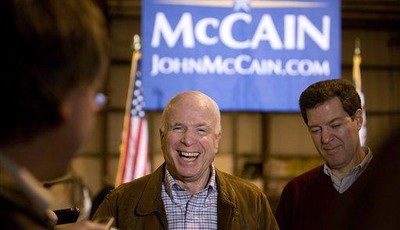 Despite New Hampshire being right around the corner, Sen. John McCain took time out of his schedule today to take part in our semi-weekly blogger conference call.

The call started out with McCain being humorous and light.  McCain mentioned that he talked with Huckabee and congratulated him.  He also said he joked with Fred Thompson that he's going to demand a re-count.

Erick at RedState has more on the early part of the call.

The call later turned heated, with a passionate McCain laying out his opinions on a variety of issues.

Regarding the Surge, McCain argued he was a reformer:

Ask the other candidates, what did they say when the Rumsfeld strategy was failing.  I'll tell you what they said:  Nothing.  ... Edwards used to call it the "McCain Strategy" or the "McCain Surge."  ... I was the agent of change.

When asked about the Bush tax cuts vote, he also stated he was a reformer on that issue, as well:

I was a foot-soldier in the Reagan Revolution.  ... Ronald Reagan wouldn't have just proposed tax cuts, in fact, Ronald Reagan demanded we have spending cuts ... and I'm the one who fought against this spending ... and led the fight against pork-barrel spending, with guys like ... Tom Coburn."  ... I cant tell you how many times I called over to the White House and said, 'Veto these bills,' 'Veto these bills.'  I tell you, it ain't going to happen when I'm in the White House.

When asked about Joe Lieberman (who has endorsed McCain), he responded:

"I would definitely want Joe Lieberman to play a part -- particularly in national security issues -- in my administration."

I've probably been on a dozen, or so, calls with McCain, and I've never heard him this fired up, and this passionate about defending his positions.