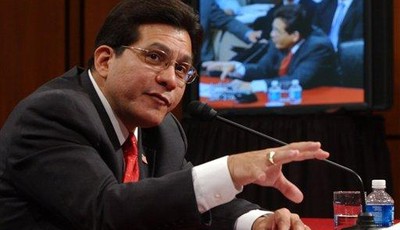 The New York Times is reporting that Alberto Gonzales has resigned as Attorney General of the United States:

Attorney General Alberto R. Gonzales, whose tenure has been marred by controversy and accusations of perjury before Congress, has resigned. A senior administration official said he would announce the decision later this morning in Washington.

Mr. Bush has not yet chosen a replacement but will not leave the position open long, the official said, speaking on condition of anonymity because the Attorney General's resignation had not yet been made public.

Mr. Bush had repeatedly stood by Mr. Gonzales, an old friend and colleague from Texas, even as he faced increasing scrutiny for his leadership of the Justice Department, including his role in the dismissals of nine United States attorneys late last year and questions about whether he testified truthfully about the National Security Agency's surveillance programs.

Gonzales, a man without a political base (conservatives and liberals, alike, disliked him -- for different reasons), was like a weight around the neck of George W. Bush.  Some argued that by being so popular, he actually insulated Bush from attacks.  But like a tiger you've got by the tail, Bush could not extricate himself from his old loyal friend, for fear of giving the Democrats a victory (and emboldening them to attempt to oust another victim).

As we commemorate the second anniversary of Katrina, it is ironic that Gonzales -- a man chose for loyalty rather than competence -- is once again in the news.

The big question is ... why now?  What about this timing is beneficial?  Is the goal to do it while Congress is out of session?  Or is Bush looking for positive news going into the September decision on Iraq?  (Of course, we asked the same thing about Rummy).