Is the Harmony Over? 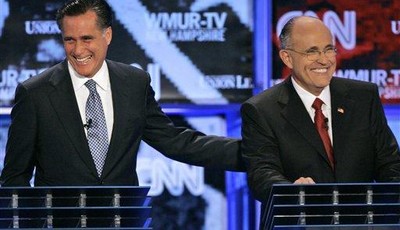 After months of relative harmony between the GOP frontrunners, It looks like Mitt and Rudy are getting a bit jealous of all the attention Hillary and Obama are getting for their recent spats ...

In one of the strongest conflicts yet between Republican presidential front-runners, former Massachusetts Gov. Mitt Romney attacked rival Rudy Giuliani Wednesday, implying that Giuliani supported illegal immigration when he was mayor of New York.

"If you look at lists compiled on Web sites of sanctuary cities, New York is at the top of the list when Mayor Giuliani was mayor," Romney said at the Abbey Hotel here. "He instructed city workers not to provide information to the federal government that would allow them to enforce the law. New York City was the poster child for sanctuary cities in the country."

The Giuliani campaign issued a statement rejecting the charge. Campaign communications director Katie Levinson said, "I am not even sure we should weigh in on this, given Mitt Romney may change his mind later today about it. Mitt Romney is as wrong about Mayor Giuliani's position on illegal immigration as he was when he last mischaracterized the mayor's record and later had to apologize. New York is the safest large city in America since Mayor Giuliani turned it around -- it is not a haven for illegality of any kind. The mayor's record speaks for itself."

This seems to be the first time that GOP frontrunners have really gone after each other. Sure there have been dust-ups from second-tier candidates (such as Brownback's attacks on Romney). But in Sunday's debate, Romney had a golden opportunity to go after Rudy on the abortion issue -- and he declined to do so. The only thing that may have changed since then is that Rudy did say he would support McCain (if he, himself, were not running).

So what's going on between these two camps?