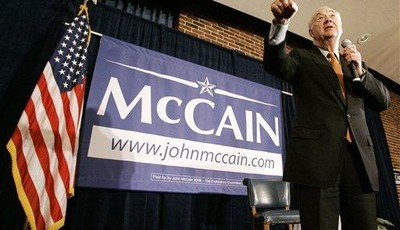 This would be Phil Gramm, for whom most of the story is reserved:

One of them helped deregulate the financial services industries in the 1990s, and now sits in the corporate suites of Swiss banking giant UBS, which yesterday announced $19 billion in investment losses tied to the crumbling U.S. real estate market.

The other is Carly Fiorina, another of the "kind of aggressive capitalists that may be sliding from favor as the nation's economy edges toward recession." Ready for the Democratic game plan?

Democratic opponents are already plotting attacks on two advocates of what Robert Reich, a former Clinton labor secretary, described as "dog eat dog capitalism," an economic philosophy that works well when the economy is on the upswing but may not play so well in a trough.

No points for originality on this one. I'll concede that, in an economic downturn, Republicans are wise to temper a free-market message with a little feel-your-pain-ism from the Arkansas school of slightly smarmy politicians, but Dems attacking the market is nothing the Republican machine hasn't been ready to counter for, errr, the last couple decades.Here's where we hear the caveat we should have heard in the lede:

To economists across the political spectrum, much of the criticism is unfair oversimplification.

Then, right back to the unfair oversimplification. For instance, did you know that Phil Gramm caused the housing crisis? Well, he might have (emphasis mine).

The spiraling crisis in the credit and housing markets has kept Gramm in focus, fairly or not...More to the point may be Gramm's aggressive efforts when he was chairman of the Senate Banking Committee to deregulate the banking and financial services industry. That culminated in passage in 1999 of a sweeping financial services law that tore down the Depression-era Glass-Steagall wall separating regulated commercial banks from largely unregulated investment banks. And little regulation was put in to replace it.

Unsurprisingly, James K. Galbraith (son of famous Keynesian John Kenneth), thinks Gramm's at fault, but Gramm has defenders in liberal quarters, as well (of course, we don't read them until after the jump):

Gramm has some unlikely defenders. Robert Litan, a Brookings Institution economist who advised the Clinton administration on financial industry deregulation, said that if anything, the crisis might have been mitigated if Gramm had gotten more of his way when he opposed the Community Reinvestment Act in the 1990s.

Gramm maintained that the act, which allowed regulators to review a bank's record on lending to the poor before approving financial industry mergers, allowed advocacy groups to effectively blackmail banks into making risky loans in poor communities. But the Clinton administration prevailed in saving the CRA.

"If they wanted a merger approval, they had to show they were making a conscious effort to make loans to subprime borrowers," Litan said. "If the CRA had not been so aggressively pushed, it is conceivable things would not be quite as bad. People have to be honest about that."

So, the kind of government manipulation of the market Gramm was trying to avoid by deregulation had an impact on the housing crisis, too. I wonder why it is I don't hear about that until after a lengthy essay on the various "unfair oversimplifications" levied against Gramm?
The FBI Cannot Figure Who Was Leaking Sensitive Info to the Press...From the FBI
Matt Vespa

The 'Bashing the Unvaccinated' Narrative Crashes into a Brick Wall
Townhall
'It felt like a meteor had struck the earth': Reporter describes his experience firing an AR-15 at the range
Twitchy
A Reporter Shoots an AR-15 and Absolute Hilarity Ensues
Redstate
Gigantic Teachers' Union Sues Mom for Asking What the Local Public School Is Teaching Her Daughter
PJ Media