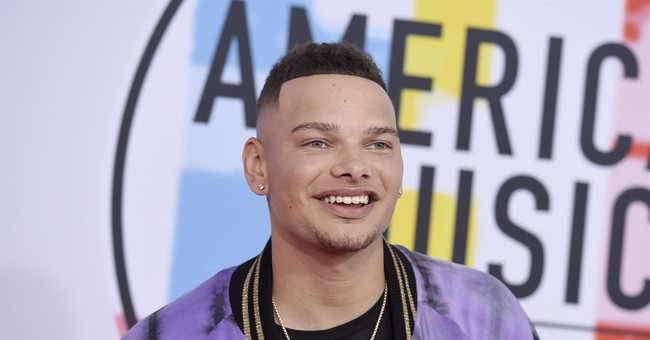 Country music singer Kane Brown isn’t buying into the “all cops are bad cops” narrative being pushed by the left.

In a recent interview with HITS Daily Double, a music industry magazine, Brown explained he has been pressured to take a stand on issues of race and policing in the wake of George Floyd's death. But as a mixed-race man, Brown said he often feels stuck in the middle.

“I’m trying to bring everybody together, and they want me to pick a side,” Brown said. “I even get pushed from one side to the other. I’m both, and both push back. So I try to understand and see each without losing the other.”

Although Brown has expressed support for the Black Lives Matter movement, he takes a more nuanced view toward the police than the one championed by many in the organization.

“There are people who think all cops are bad, but I know that’s not true,” he stated. “Those kids who were bullied in high school, the ones who get this power trip with a badge, they’re out there. They let the power go to their heads; they bully people, but that’s not all cops.”

The 26-year-old singer hardly comes from a privileged background. Born in Tennessee, Brown was raised by a single mother. His father, who is of African-American and Cherokee descent, has been incarcerated since 1996. Growing up, Brown and his mother were sometimes homeless and often moved around Georgia. In the interview, Brown admitted that the black side of him would be “super scared” to be pulled over by a cop. But he also acknowledged that his own actions can impact an interaction with law enforcement.

“I know if I get stopped, I need to put my hands out the window so they can see I don’t have a weapon,” he said. “You have to be real careful about how you speak, because you don’t know who’s walking up to the car; you don’t know what they’re scared of or acting out of.”

Brown added that officers are “in the line of fire every day,” which should be taken into consideration in discussions of police tactics.

“I try to love everybody: the cops who do their jobs, anyone who’s a good person in this society,” he said.

Brown expressed hope that his latest song, "Worldwide Beautiful," can be a voice for unity. Brown had written it over a year ago and was saving it for his new album but decided to release it early in light of the protests and riots. The song includes the lyrics, “White churches, black churches / Different people, same hearses / It's kinda hard to fight with each other / Laying down in the ground, six under / At every show I see my people / They ain't the same, but they're all equal One love, one God, one family.”

“[A]ll the people in the media and on social media, even my family, were just shouting and no one was listening,” he said. “That wasn’t going to solve anything; it was just making it worse. So, like the song says, ‘One love, one God, one family.’ I figure if we start there, we’ve got a chance.”

How refreshing to see a celebrity push back on the division and polarization hocked by the media and think for himself.