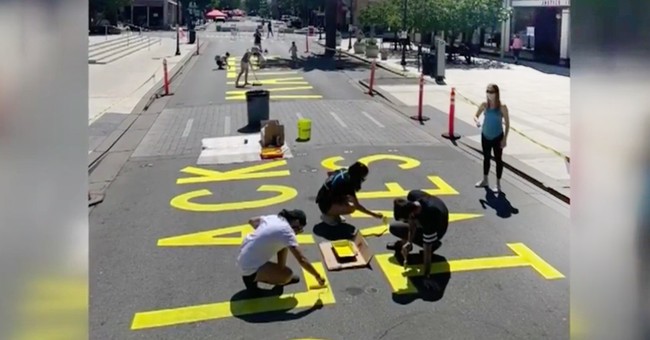 In California, it seems the antidote to a Black Lives Matter street painting is the threat of a “MAGA 2020” mural.

Earlier this month, a Redwood City artist in the state's San Francisco Bay area asked his city council for permission to paint a 17-foot BLM mural on a street through the town’s Courthouse Square during an Independence Day art celebration. The city not only authorized the mural; they supplied with him yellow poster paint for the project.

Then Maria Rutenburg, a local real estate attorney, asked for permission to paint the Trump campaign slogan alongside the social justice moniker. Rutenburg argued that since public streets are now being used to promote political agendas, she should have the freedom to express here own political views.

“Governments cannot and should not get to pick and choose who should be allowed to speak,” she said in a statement to KRON4. “Now that the cities open up asphalts as public forums, everyone with any political message is free to write their own. I, for one, would like to paint MAGA 2020. At a time like this, it’s especially important that we allow free and open political discussion for all sides, not just BLM.”

But instead of approving her request, the city decided the BLM painting was a potential traffic hazard and scrubbed it from the street under the cover of darkness.

@IngrahamAngle I asked Redwood City to allow me to paint MAGA2020 next to BLM on the Broadway. Instead, they are erasing BLM. I stand for the 1st Amendment and everyone 's right to express their political views in a new public forum of street asphalts.

Dan Pease, the artist who painted the BLM slogan, said he expected the mural to fade eventually but was surprised by the city’s decision to proactively remove it.

As social justice messages pop up on streets across the county, they are increasingly met with pushback from other citizens. The conservative group Judicial Watch is suing Washington, D.C. for denying timely, equal access to paint its motto, “Because No One is Above the Law,” in front of its Capitol Hill office, despite allowing activists to paint “Black Lives Matter” and “Defund the Police” on a street leading up to the White House. Judicial Watch is also seeking to paint its tagline on an Uptown section of Fifth Avenue in New York City after Mayor Bill de Blasio announced plans to have the BLM slogan painted throughout the city.

In Salt Lake City, a pro-life supporter painted “Baby Lives Matter” on a street in front of a Planned Parenthood clinic. The message went up late Friday night and lasted 10 hours.

Bevelyn Beatty, a 29-year-old Christian activist from Staten Island, made headlines for defacing a BLM mural on a street in front of Trump Tower in Manhattan. Beatty arrived on the scene equipped with black paint and got on her hands and knees to spread it over the yellow letters, screaming, “Y’all don’t care about black lives. Refund the police!” Beatty was arrested and charged with criminal mischief but was free just hours later. She and several allies have targeted two other BLM murals in the city since then.

As the Left grows increasingly emboldened, it seems conservatives are finally realizing that the legal protections of the First Amendment go both ways.