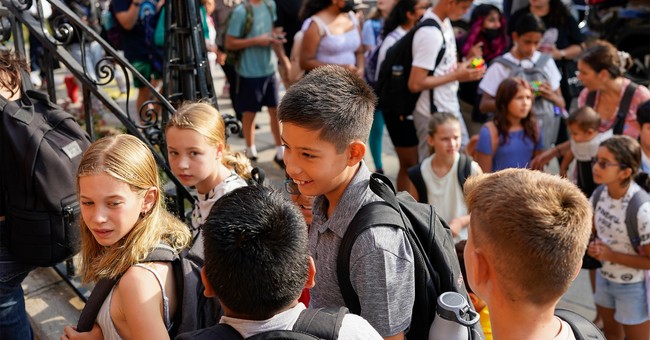 On Friday, Virginia’s Department of Education posted new model policies directing school districts to require transgender students to use restrooms, locker rooms and participate in programs that align with their biological sex rather than their “gender identity.”

In the guidance, the Department of Education clearly stated that “students shall use bathrooms that correspond to his or her sex” and that schools should provide single-user facilities for “any student with a persistent and sincere belief that his or her gender differs from his or her sex.”

“[School Division] shall provide reasonable modifications to this policy only to the extent required by federal law,” it said.

This month, Townhall reported how Gov. Glenn Youngkin (R) spoke at a rally and criticized a school district in Fairfax County, Virginia that was reportedly requiring teachers to undergo a training program ahead of the school year that says parental consent is not required for transgender students who want to “socially” transition at school. Social transitioning includes going by a chosen name and preferred pronouns.

"They [school officials] think that parents have no right to know what your child is discussing with their teacher or their counselor, particularly when some of the most important topics, most important topics that a child may want to discuss are being determined," Youngkin reportedly said.

"What's their name? What pronoun will they use? How are they going to express their gender? This is a decision that bureaucrats in Fairfax County believe that they should be able to make without telling parents,” he added.

Last year, in the Virginia gubernatorial debate, Youngkin said that he believed parents should be involved in their children’s education. His opponent, former Gov. Terry McAuliffe (D), said “I don’t think parents should be telling schools what they should teach.” Youngkin defeated McAuliffe in the election.

The guidance released on Friday directed school districts in Virginia against this type of training and said that schools cannot “conceal” information about trans students from their parents.

“No policy, guidance, training, or other written material issued by the [School Division] may encourage or instruct teachers to conceal material information about a student from the student’s parent, including information related to gender,” the guidance said.

“To ensure parents are able to make the best decisions with respect to their child, school personnel shall keep parents fully informed about all matters that may be reasonably expected to be important to a parent, including, and without limitation, matters related to their child’s health, and social and psychological development,” it added.

“Today, Virginia has shown that it is listening to parents through its new proposed guidelines, and we are grateful for their responsiveness,” she said.