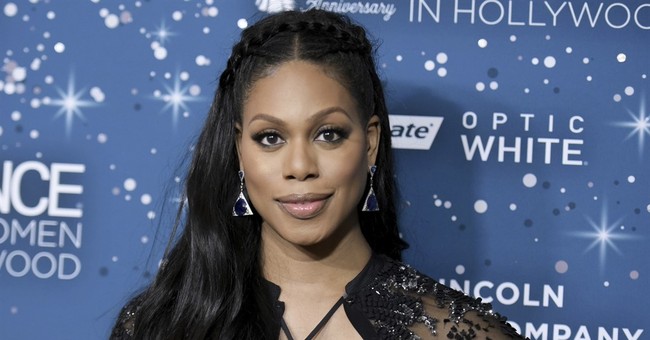 Transgender actress and LGBTQ+ activist Laverne Cox, who is a biological male, is the inspiration behind a new Barbie doll, Mattel announced Wednesday.

Cox, who turns 50 this week, said in a statement that the doll is an inspiration for "young trans people."

"I can't believe it. I love her outfit," Cox told PEOPLE Magazine. "What excites me most about her being out in the world is that trans young people can see her and maybe get to purchase her and play with her, and know that there's a Barbie made by Mattel, for the first time, in the likeness of a trans person."

LGBTQ+ activist Laverne Cox is making history by becoming the first-ever transgender person to get their own Barbie doll. Mattel announced on Wednesday that it would celebrate Cox’s 50th birthday with a Tribute Collection Barbie doll. pic.twitter.com/qJf45nlzhf

"I think in an environment where trans children have been used as a political football, when over 250 pieces of anti-trans legislation have been introduced in state legislatures all over the country in 2022 alone, and access to gender-affirming healthcare has been denied by policies signed into law in my home state of Alabama, in Arkansas and other states... That in this environment where trans kids are being attacked, that this [Barbie doll] can also be a celebration of transness, and also a space for them to dream, understand and be reminded that trans is beautiful," Cox said to PEOPLE. Cox was reportedly "very involved" in the creation of the doll.

In a statement to PEOPLE, Executive Vice President and Global Head of Barbie and Dolls at Mattel Lisa McKnight said that she "couldn't be more excited" for the doll.

"We are proud to highlight the importance of inclusion and acceptance at every age and to recognize Laverne's significant impact on culture with a Tribute Collection Barbie," McKnight said in the statement.

"I begged my mother for a Barbie doll and she said no because I was assigned male at birth," Cox added in her interview. "And when I was in my 30s, I was in therapy and telling my therapist that I was denied the opportunity to play with Barbie dolls. And my therapist said, 'It's never too late to have a happy childhood, and what you should do for your inner child is go out and buy yourself a Barbie doll.'"

Cox added that the Barbie doll is a "moment" of "personal healing" and that is will "let go of the shame" and the "trauma."

This week, Townhall reported how "transsexual" activist Buck Angel, who was born a biological female, said in a Fox News interview that it's "inappropriate" for the transgender community to push their agenda on children.

“It’s inappropriate for our community to keep pushing this narrative as if anyone can be trans, cause that’s not true,” Angel said. "Our community is failing our community," Angel added. "We’re not being loving and we're not being caring. We’re being weird."