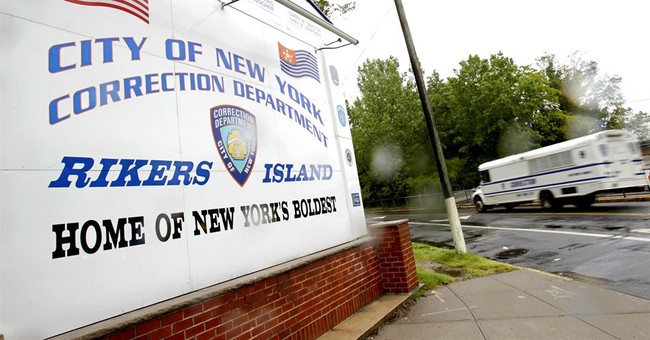 A transgender inmate at Rikers Island reportedly raped a female prisoner and has been sentenced to seven years, the New York Post reported Monday.

Ramel “Diamond” Blount, 33, pleaded guilty to attempted rape on April 7. Investigators said in February, Blount, who lived in the female section of Rikers, approached a female inmate in the restroom after she finished showering and raped her.

The victim reported the rape to officials at the prison who then administered a rape kit. The results matched Blount’s DNA recorded in the New York State Registry. Blount recieved a seven-year sentence with eight years of post-release supervision and will be required to register as a sex offender.

In a statement to the Post, Bronx DA Darcel Clark said “sexual violence against anyone is unacceptable.”

This month, Matt reported how two female inmates at a women’s prison in New Jersey fell pregnant after having sex with a transgender inmate. Kara Dansky of the Women’s Human Rights Campaign told Tucker Carlson in an interview shortly after that “transgender women” should not be housed with women in prison.

“The story that’s happening in New Jersey is obviously horrible for so many reasons. We need to not have men being housed in women’s prisons,” Dansky said in the interview.

“But, a couple takeaways from this that I just want to point out are first of all, the state is not getting away with this by telling its residents that they are housing men in women’s prisons. What are doing, of course, is they are telling the residents that they are housing so-called ‘transgender women’ or ‘trans women’ in women’s prisons, suggesting that there is some sort of subcategory that is called ‘transgender women’ or ‘trans women’ and it’s not true. The fact of this story shoots a hole right through the trope that ‘trans women are women,” Dansky added.

“Obviously, that is not true, because the individuals that are the focus of this story impregnated women and every thinking adult, no matter what the president of the United States has to say on the matter, knows that there is no category of women who can impregnate women,” she concluded.

This week, Townhall covered how a federal judge ordered the Bureau of Prisons to secure “gender-affirming” surgery for a transgender inmate. This comes after the Bureau denied the inmate the surgery early this year.