Russia’s Invasion into Ukraine 'Never Would Have Happened Under Trump' 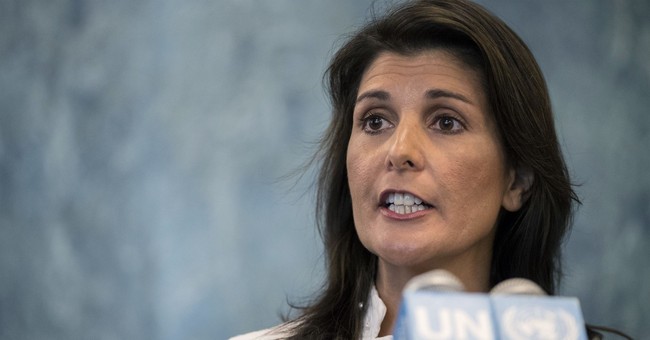 Haley made the remarks on NBC’s “Meet the Press.” In the interview, Haley described Putin as an “evil tyrant” and

“What I will tell you about President Trump is as much as everybody wants to talk about what he says, what I look at is what he did. He sanctioned Russia. He expelled diplomats. He shut off Nord Stream 2, which is all Putin ever wanted. He built up our military and he made us energy independent. All of those things countered Putin and countered Russia. This never would have happened under Trump. What we have to look at now is how we make sure this doesn’t go further under Biden,” Haley said in the segment.

Haley continued, calling Russia’s invasion into Ukraine a “terrible mistake” that started with our disastrous withdrawal from Afghanistan.

“We’ve done nothing but show weakness,” Haley added. “We have got to show strength.

“You can talk about past presidents all you want, but the last thing you need to be doing is looking for the TV remote when your house is burning down. We’ve got to start dealing with the situation at hand,” she concluded.

‘’You don’t think any of those things sent a message to Vladimir Putin that America is divided, the West is divided and he can get away with whatever he wants?”

“You said it in every one of those things. You kept saying ‘he tried.’ All I know is what he did,” Haley responded. “I was personally there at the United Nations when he got out of the Iran deal, when he sanctioned Putin, when he expelled diplomats, when he refused Nord Stream 2 pipeline so I watched what he did. He did more – he did stronger things against Russia than Republican or Democrat presidents before him. This was something that Putin knew – not to mess with the United States.”

America needs to wake up and stop letting tyrants like Putin and Xi run all over us.