GOP Senator Who Fauci Called a ‘Moron’ Gets the Last Laugh 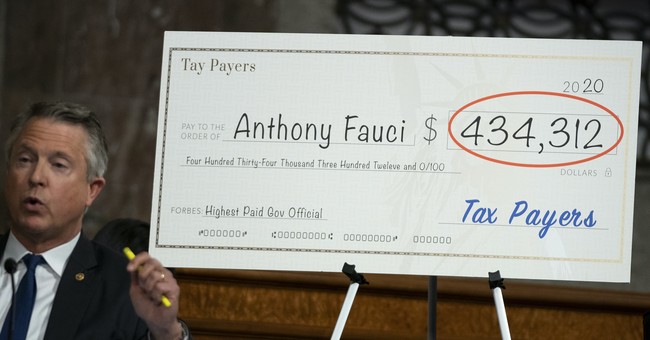 GOP Sen. Roger Marshall (KS) plans to introduce a bill named after President Biden’s Chief Medical Adviser and Director of the National Institute of Allergy and Infectious Diseases (NIAID) Dr. Anthony Fauci. This comes after Marshall clashed with Fauci at a Senate hearing this week.

As Leah covered, Fauci was caught on a hot mic Tuesday calling Marshall a moron during a Senate Health Committee hearing. In a video shared to Twitter, Fauci can be heard saying “what a moron” and “Jesus Christ” after Marshall pressed him about his financial disclosures.

Marshall’s bill, the Financial Accountability for Uniquely Compensated Individuals (FAUCI) Act, would require the Office of Government Ethics (OGE) to provide financial records of administration officials, including Fauci, and a list of those in government whose financial records are not public, The Hill reported.

The Center for Public Integrity noted in a report published Thursday that Fauci’s finances are public, as required by law, but are difficult to obtain.

“I first asked the NIH for Fauci’s disclosure on May 18, 2020 and didn’t receive it until Aug. 5. The NIH also chose to give the disclosure to me under the Freedom of Information Act, which they didn’t need to do and caused the document to be partially redacted,” The Center for Public Integrity reporter Liz Essley Whyte wrote.

In the Senate hearing Tuesday, Fauci told Marshall his “financial disclosure is public knowledge and has been so for the last 37 years or so."

“The Big Tech giants are doing an incredible job of keeping it from being public. We’ll continue to look for it. Where would we find it?” Marshall inquired.

"All you have to do is ask for it," Fauci added. "You're so misinformed, it's extraordinary."