Billie Jean King: ‘Nothing Did More to Advance Women’s Economic Status Than the Right to Abortion’ 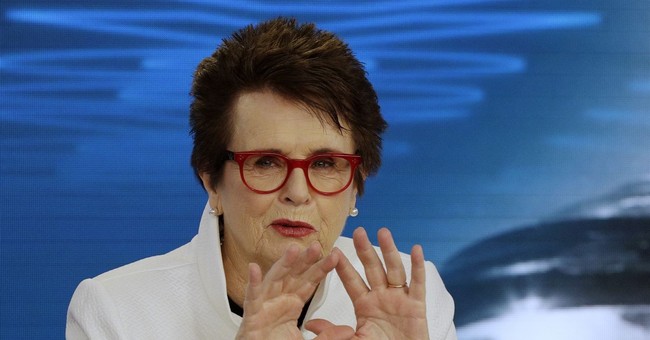 This week, tennis champion Billie Jean King published an op-ed in The Washington Post where she claimed her abortion experience “shows why the Supreme Court must save Roe v. Wade.” King’s piece came amid oral arguments in the Supreme Court case Dobbs v. Jackson Women’s Health Organization, which surrounds a 15-week abortion ban in Mississippi. Dobbs has the potential to overturn Roe, which, in 1973, gave American women the right to abortion.

King explained how in 1971, she became unexpectedly pregnant with her then-husband, Larry, when she was 27 years old and “the top-ranked women’s tennis player in the world.” She said that while she and her husband were “friends and business partners,” their marriage had been on shaky ground for years.

“We agreed that a woman had the right to decide if and when she wanted to be pregnant. He said he would support whatever choice I made,” she wrote.

“Ultimately, tennis was not the deciding factor,” she added. “[O]ur lives were so complicated and unpredictable that I couldn’t imagine bringing up a child in such chaos.”

King, who resided in California, decided to get an abortion. At the time, abortion was legal in the state “as long as the procedure was ‘therapeutic’ and performed by a doctor in the hospital.” She was required to obtain approval from a hospital committee and have her husband sign a consent form before undergoing the abortion.

“Arguing to a dozen or so people I had never met why I qualified for an abortion remains one of the most degrading experiences in my life,” King wrote. As for the consent form, King stated “[men] remained in charge of not just financial matters but even the right to govern my own body.”

At the abortion appointment, King recalled a 15-year-old who traveled from Alabama to get an abortion. In the waiting room, King claims to have comforted this “terrified” teenager, who was “pretty far along” in her pregnancy.

“I never saw her again, but I hope that she was able to finish school, earn a good living and have children if she so chose – all things that generations have been able to take for granted in the nearly 50 years since Roe became settled law,” King stated.

To wrap up, King delved into statistics from an amicus brief signed by “more than 150 economists” that show how abortion access increases women’s probability that they will finish college and enter a professional occupation.

“My life’s work has been about equality for all. Nothing did more to advance women’s economic status that the right to abortion that came with Roe,” King concluded. “The central premise of Roe, which Mississippi seeks to overturn, is about a women’s right to make fundamental decisions about their lives, futures, and families. If we lose the ability to control our bodies and our futures, so many of the gains women have made will be undone.”

In September, as I covered, over 500 female athletes signed an amicus brief demanding the Supreme Court strike down Mississippi’s 15-week abortion law, citing age-old talking points about how having a child interferes with career endeavors.

“Denying an athlete control over her body could jeopardize her competitive career and violates Roe and Casey’s basic guarantee that the 'destiny of the woman must be shaped to a large extent on her own conception of her spiritual imperatives and her place in society,’” the brief states.

“Amici believe that, like themselves, the next generation of women athletes must be guaranteed bodily integrity and decisional autonomy in order to fully and equally participate in sports,” the brief continues. “Were these rights to be abrogated, Amici understand firsthand that women’s participation in athletics would suffer, including because some women athletes would not be able to compete at the same level — or at all — without access to abortion care and without the knowledge that the decision whether to continue or end a pregnancy remains theirs.”