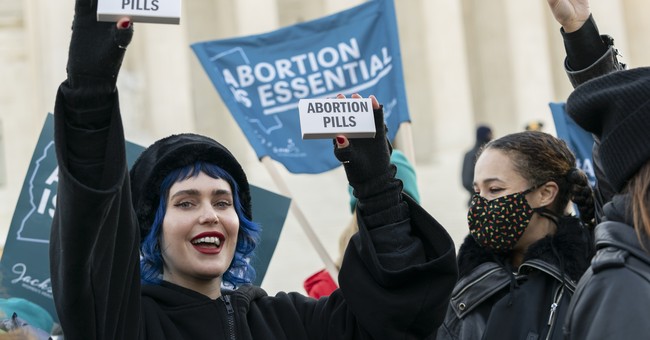 On Wednesday, the Supreme Court of the United States (SCOTUS) heard oral arguments for the case Dobbs v. Jackson Women’s Health Organization, which surrounds the constitutionality of a 15-week abortion ban in Mississippi. Dobbs is the first case in decades that could overturn precedents set by landmark cases Roe v. Wade and Planned Parenthood v. Casey.

Following the hearings, reports indicated that the conservative-majority Supreme Court would be open to upholding Mississippi’s abortion law and possibly overturning Roe. Predictably, this news sent pro-abortion lawmakers, advocacy groups, and the like, into a frenzy.

Pro-abortion organizations like Emily’s List, the Center for Reproductive Rights, and Planned Parenthood called on SCOTUS to uphold Roe and for citizens to elect more female, Democratic, pro-abortion lawmakers.

We can’t simply let nine justices be in charge of deciding whether people should have reproductive rights. We need to elect more Democratic pro-choice women to office at the state and federal level to protect the right to choose.

We will fight for the right to choose by electing more Democratic pro-choice women to office. #AbortionIsEssential

What’s at stake in Dobbs v. Jackson Women's Health Organization? The core tenet of the right to abortion in the US: that every person, not the government, decides whether they want to continue a pregnancy. Our rights MUST be protected. #AbortionIsEssential

Agree. Abortion is basic health care and we must not only protect it, but expand access.#LiberateAbortion https://t.co/uz7mI5mJLw

Thank you for being there, and for standing up and speaking out as a Catholic for choice!!#AbortionIsEssential #LiberateAbortion #BansOffOurBodies https://t.co/lQgMUnUrDa

Politicians shouldn’t be able to force us to carry pregnancies against our will.

Whether it’s in the courts or on the streets, we will never stop saying it:

Abortion is a right. pic.twitter.com/BFayIuY6OB

Make no mistake: #AbortionIsEssential and a majority of Americans in Washington state and around the country agree. https://t.co/r2t26osByQ

We must pass @RepJudyChu's Women’s Health Protection Act NOW, to safeguard abortion rights with the force of federal law. pic.twitter.com/zYmUAiKsR0

No one – not a justice, not a politician, not a pundit – has any right to interfere a woman’s constitutional right to make her own health care decisions. That’s why I’m committed to ending the filibuster and voting to make abortion rights the law of the land.

As #SCOTUS hears #DobbsvJackson argument today, I am proud to raise my voice & be heard with my fellow Catholics in support of reproductive care for everyone, no matter who they are. pic.twitter.com/cq0Ice3ZPr

I’m here for this pic of @RepSylviaGarcia holding a @Catholic4Choice sign with Rep. @janschakowsky holding a @NCJW sign. We stand united as people of faith to say loudly and proudly that #AbortionIsEssential. ?? pic.twitter.com/JMu1ExhDkd

I don’t just want a world where abortion care is legal.

On December 1st, the fate of Roe v. Wade lies with the Supreme Court. Again.

As long as there are active efforts to strip away the freedom to choose, women’s rights everywhere are in jeopardy. I will do everything in my power in the Senate to stand up for reproductive rights for Nevadans and all Americans. pic.twitter.com/HWI6DJECgY

Other organizations and individuals took to Twitter to claim that abortion bans are “rooted in white supremacy,” “discriminatory” and “racist.”

“We know that restricting abortion is racist, it’s sexist, and it’s ageist. Young people will NOT let the right to abortion access go away.” ????

Abortion bans are discriminatory — often effecting people of color, those with disabilities, those in rural areas, and those struggling to make ends meet.

If you’re following the infuriating, dehumanizing, misogynist arguments made at #SCOTUS in the service of dismantling #abortion rights and limiting women’s freedom, know your history. This ain’t about embryos or “life”—it started as a racist scam. Still is. #prochoice #roevswade https://t.co/HWmzVEK3Ab

1/I was too upset by SCOTUS abortion arguments to tweet. I can't repeat Mississippi's arguments to overrule Roe because they are ridiculous. Lawyers for the clinics & the US (Rikelman & SG Prelogar) were brilliant and made almost all the points needed, but it fell on deaf ears...

The conservative justices trying to undermine reproductive rights were confirmed under a simple majority vote.

Why should Congress need a super majority to codify those rights under law?

This week, White House Press Secretary Jen Psaki said that President Biden believes the Mississippi law “violates women's constitutional rights” and poses a “grave threat.” Biden, who has described himself as a “devout Catholic,” has a track record of supporting pro-abortion legislation, including stripping the Hyde Amendment from the 2022 budget.

.@PressSec: "The President believes the Mississippi law blatantly violates women's constitutional rights to safe and legal abortions. This case presents a grave threat to women's fundamental rights, to all of our rights as protected under Roe v. Wade." pic.twitter.com/boLunnFWaR