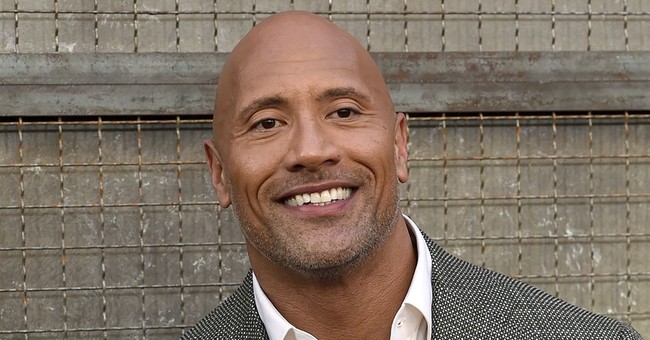 At the premiere of his new film “Red Notice,” actor Dwayne Johnson spoke on the fatal shooting of cinematographer Halyna Hutchins and how his production company, Seven Bucks, will not use "real guns" on set again.

As we covered, Hutchins died on Oct. 21 when she was shot on set of the film “Rust” when actor Alec Baldwin discharged a prop gun, striking both her and the film’s director, Joel Souza. Hutchins was transported via helicopter to University of New Mexico Hospital where she succumbed to her injuries. Souza was hospitalized and is recovering from his injuries.

“Moving forward on any Seven Bucks production, television, or film, or otherwise, we will not use real guns ever again. We are going to be using rubber guns,” Johnson said in the red carpet interview with the Associated Press.

Dwayne Johnson says that after Alec Baldwin's fatal on-set shooting of cinematographer Halyna Hutchins, his production company "will not use real guns ever again" on its TV and film sets. pic.twitter.com/3EBQNjY8fw

"We won't worry about the dollars, or won't worry about math or what the cost is. I think we're going to do it the right way," Johnson continued.“It’s [Hutchins’ death] created a new lens and a new perspective on how we can operate moving forward. As awful as this situation was, and is, we have to use this as an example, and I think, in a way to be smarter as we move forward. Be safer.”

In a lengthy statement shared to Instagram on Oct. 26, a coalition of “Concerned On-Set Armourers and Weapons Masters” said Hutchins' tragic death was preventable, describing the set as “a film where safety was not prioritized” and “a poorly run production.”

“The tragic loss of life in this case was likely the result of incompetence and inadequate use of professionals who serve as the gatekeepers to the film industry’s safety protocols and standards. We can state that this tragedy was not caused by a lack of established rules of procedures. As On-Set Armorers and Weapons Masters we see that the incident was completely preventable and should not have occured, given the longstanding and well-established safety regimen that we work under and implement every day in our industry. The incident was caused, in part, by producers who were unwilling to hire competent people following our long established and tested firearms safety procedures. We are aware of numerous violations of Safety Bulletin Number 1 (see attached) that occurred on this production. Exactly how many violations and which ones will be confirmed by the investigation, but we believe that the evidence will show that this tragedy was a failure of protocol and not due to the need for new or additional regulations.”

As Matt covered, authorities said that “everything is on the table” when it comes to pressing criminal charges against Baldwin for Hutchins’ death. On Wednesday, former camera crew member, Lane Luper, who quit the day before the accident, said in an interview with Good Morning America that safety concerns on set were ignored. The remaining camera crew members walked out the day of the fatal shooting.