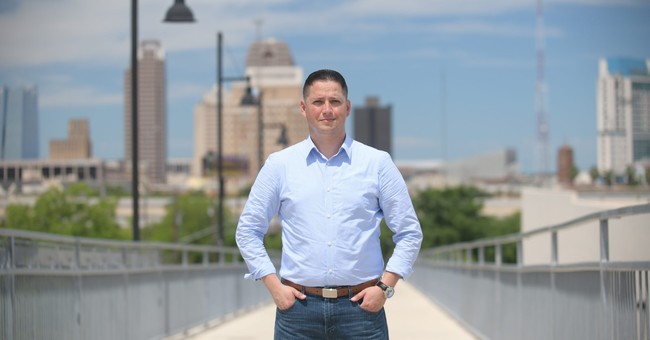 Gonzales, a San Antonio native, grew up in a “total Democrat household,” which he says is “a big part of who I am.” After moving out at age 15, he began working as a door-to-door newspaper subscription salesman to get by. He did this for three years before joining the Navy, where he got his high school diploma while in the service.

“I always knew education was the way to go. I needed that in order to kind of get out, if you will,” Gonzales said in the interview. “I always knew I was going to serve in the military. I didn't realize it was going to be the Navy.”

In the Navy, Gonzales worked as a cryptologist, which he said is to “intercept bad guy communications.”

“[A]ny way a person communicates, whether it's their cell phone, text message, email, a pigeon, in manual morse, whatever means of communication. My job was to intercept that, analyze it, and then for us to have actionable intelligence on it,” Gonzales explained. He spent five years in Afghanistan, 2001 to 2006, during his service. When he first arrived in Afghanistan, he described it as being “like I landed on the Moon. It was a completely different environment.”

Recently, Gonzales participated in an RNC video project on the war in Afghanistan that featured several lawmakers who served. This video came after the Biden administration’s disastrous withdrawal from Afghanistan.

“That'll never change. I mean, the anger, the animosity towards President Biden for the way he handled things. You can debate whether we should stay or leave all day long. That's not the issue. The issue is the manner in which they left,” Gonzales said. “We will never forget how this president withdrew from Afghanistan. Never.”

As I reported, Gonzales said in an interview in August that terrorists on the “watch list” have already been captured trying to enter the United States through the southern border. The withdrawal from Afghanistan, and the Biden administration’s ineptness at handling the border crisis, he warns could lead to terrorists seeping into the United States.

“[T]he thing that keeps me up at night the most is another 9/11 type of event,” Gonzales said in the podcast. He mentioned that 52 migrants associated with Al-Qaeda have been captured in Panama on their way to the United States.

As Townhall previously covered, Gonzales’ congressional district encompasses over 800 miles of the United States-Mexico border, amounting to roughly 40 percent of the entire border. In his Republican address earlier this year, Gonzales noted that 70 percent of his constituents are Hispanic-Americans who are hurting immensely because of the immigration crisis.

“[T]hey feel powerless and they feel frustrated,” Gonzales said. “[Y]ou can't stop fighting. We can never stop fighting because if that happens, we will only see these policies get even worse.”

Currently, McDaniel notes, the Republican Party is seeing more Americans of Hispanic descent, especially Mexican, Colombian, Cuban, and Venezuelan, joining the party. Gonzales’ congressional seat has gone back and forth over the years between Democrats and Republicans, but Gonzales said his messaging during his campaign was geared towards both English and Spanish speaking people.

“I was talking to these demographics that have basically been left out,” Gonzales said. He won his race against his Democratic challenger.

Wrapping up, Gonzales said there’s ways Republicans can serve and feel more empowered ahead of the 2022 midterm elections, where hopefully, they will take back the House and the Senate.

“[T]here's a lot of ways to serve,” Gonzales said at the end of the interview. “[G]et involved in any form or fashion at all levels. Yes, the presidency is important. Yes, Congress is important. But so is your school board. So is your neighborhood association. Just get involved. You’d be amazed on how much less powerless you'll feel as you're starting to get involved in there. That's how we save this country. But it's not just the people in Congress, it's all of us.”

Watch the full podcast below.