Book Review and Q&A with Martin Dugard, Author of 'Taking Paris: The Epic Battle for the City of Lights' 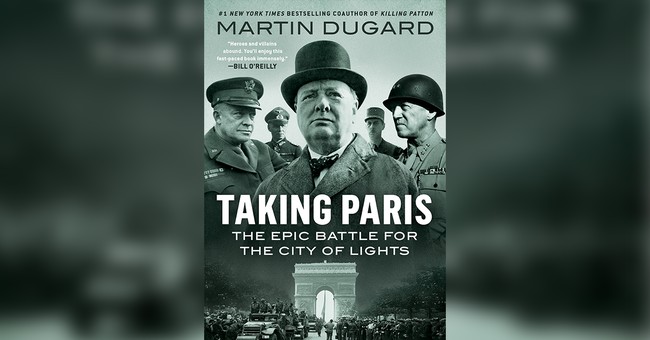 In this case, Dugard recounts the Nazi occupation and subsequent liberation of France, specifically, Paris, during World War II. Each chapter opens with a listed setting, date, and timestamp, placing the reader in the story in a specific character’s point of view. This format of noting the time and place at the beginning of each chapter helps thread together each storyline and show the trajectory of the war as the book progresses.

Similar to Dugard’s “Killing” , such as “Killing Kennedy” and “Killing Jesus,” “Taking Paris” is told through several points of view, including British Prime Minister Winston Churchill, Free France army officer and future President Charles de Gaulle, and British espionage agent Virginia Hall. Furthermore, Dugard does an excellent job of highlighting the day-to-day life of Parisians and foreign diplomats in Paris, such as American Ambassador to France William Bullitt Jr., before and during the occupation.

Dugard’s retelling of events surrounding the occupation of Paris, before and after the United States' involvement in the war, is all-encompassing. However, there is a heavy emphasis on both Churchill and de Gaulle’s roles. From Churchill, we see from his perspective how the occupation of France affected Great Britain, such as the Dunkirk evacuation. We also see from both Churchill and de Gaulle their reactions to America’s abrupt entrance into the war.

Scattered throughout the book are other factoids and lesser-known events, such as the Battle of Bir Hakeim where Free France troops fought the Wehrmacht in the north African desert. Other events, such as the execution of Jacques Bonsergant, the first execution of a French civilian by the Nazis, and the executions of the collaborators of the anti-Nazi newspaper “Résistance” show how Parisians' attitudes toward the Nazi regime changed as the war continued.

“Taking Paris” is a captivating retelling of Paris through WWII. It’s gripping, easy-to-read, cinematic writing made it hard to put down. In a Q&A with Dugard, Townhall discussed how he conducted research for “Taking Paris” during the pandemic, his writing inspiration and process, and what’s on the horizon regarding his new “Taking” series.

Townhall: You’ve co-authored numerous “Killing” books detailing specific periods and events in history. How did you get the idea to write "Taking Paris?"

Martin Dugard: I enjoy writing about topics that readers think they know well, if not exhaustively, then telling the story in a brand new way that reveals a whole new level of detail and excitement. The German occupation of Paris is such a topic. We all know about the Nazi invasion of France and the eventual D-Day landings, but that story of what happened in between to the people of Paris gets lost. I wanted to tell their story.

TH: How did you conduct research for "Taking Paris?"

MD: Extremely difficult, due to Covid. I could not travel to France, which is typically the first aspect of my research process, so I relied on detailed notes I took during 10 years covering the Tour de France between 1999-2000. Then the usual array of National Archives, newspaper archives, YouTube videos of war time action, and videos of various speeches. You’d be surprised how much detail can be gleaned by watching a simple video of the people you’re writing about – mannerisms, crowd response, clothing, and on.

TH: During your research, did you learn anything new?

MD: "Taking Paris" represents a completely new aspect of WWII for me. I thought I knew a ton but once I began digging I learned so much more. It’s all about digging down deeper and deeper into the most minute details.

TH: What did your process of writing look like for "Taking Paris?" Is it a similar process to your previous books?

MD: It’s pretty straightforward: get up, feed the dogs, read the paper, drink coffee, then open the laptop and go to work. Six hours a day, six days a week. Take the book one word at a time. Sometimes that means 1,000 words a day and others it’s just a few hundred. One new routine I added for "Taking Paris" was printing out the previous day’s batch of pages and reading them aloud, then editing them on the page rather than on the computer. Makes a world of difference to hear the spoken word. If I stumble over a sentence while reading it, then the average reader will surely stumble over it when the book is published.

TH: What inspires you to write historical nonfiction?

MD: I am on a mission to make history exciting. I have a passion for history and love to see a story well told. I want to write books that keep readers turning the pages, not slowing them down with boring sidebars. The best history is way more unpredictable than any fiction story, and it deserves to be told in a way that immerses the reader completely in the written word. I was helped greatly in this process by my editor, Brent Howard, who really challenged me to tell a big story.

TH: Can you tell us what you’re working on next? Is another “Taking” book in the works?

MD: "Taking Paris" is the first book in a new “Taking” series. I am currently working on the second book. Details to follow, but it’s just as epic, just as cinematic, and even more sprawling and action-packed than "Taking Paris." Look for it wherever books are sold in September 2022.