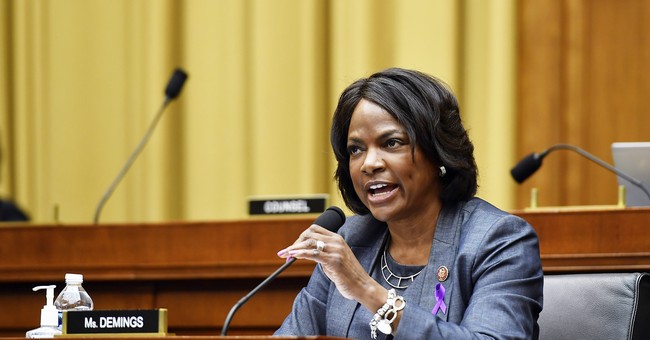 Florida Congresswoman Val Demings (D-FL) called for the closure of a local immigrant detention center on the heels of announcing her bid for Senate and amid the astronomical spike in encounters at the southern border.

On July 22, Demings joined a group of Congressmen and women calling for the closure of Glades County Detention Center in Moore Haven, Florida for the treatment of immigrants at the facility. In a letter from the representatives, published by Freedom for Immigrants, an organization with the aim to expose and abolish immigrant detention centers in the United States, Demings and seven other lawmakers called on U.S. Department of Homeland Security Secretary Alejandro Mayorkas to shut down the center, describing it as “not operationally necessary” and that it “violat[es] human dignity.”

The push to close the Glades County Detention Center in Florida is heating up! ??

8 members of Congress are joining the chorus of voices calling for closure, including immigrants detained at GCDC and the #ShutDownGlades Coalition.

“We commend the Department and the Biden administration for your efforts to raise standards of care throughout the civil immigration enforcement process, especially after the last administration established policies that facilitated deplorable and even deadly conditions in migrant detention centers,” the letter states. “It is important that the Biden administration take this opportunity to end the previous administration’s legacy of immigrant rights abuses. Terminating the contract with Glades County and closing this facility would be a critical step towards the Department’s larger goal of creating a fairer, more just, and more efficient civil immigration system.”

Deming’s push for the closure of the facility follows suit with her anti-border security stance, as she has voted against bills enforcing border security in the past. But, in 2017, Demings voted against an act that would have provided nearly $1.6 billion in funding for the U.S. Department of Homeland Security, specifically, U.S. Customs and Border Protection. Now, in 2021, she is calling for the closure of a government-contracted migrant detention facility due to the living conditions the residents endure.

Out of Demings and the seven other lawmakers who signed the letter, none widely publicized doing so. And, in recent months, immigration at the southern border has increased immensely, as over 180,000 encounters occurred in May 2021 alone. For reference, in May 2020, our southern border saw approximately 23,000 encounters. This immigration spike prompted  Arizona Gov. Doug Ducey and Texas Gov. Greg Abbott to send a joint letter to the governors of the other 48 states requesting all available law enforcement services be sent to the border to help alleviate the crisis.

“Securing our border with Mexico is the federal government’s responsibility. But the Biden administration has proven unwilling or unable to do the job. This failure to enforce federal immigration laws causes banns that spill over into every State,” the letter stated. “Given the staggering number of violations now occurring in Texas and Arizona, additional manpower is needed from any State that can spare it.”

With an overwhelming border crisis on our hands, calling for the removal of an ICE detention center is a step in the opposite direction of what lawmakers should implement to rectify the situation. And with the midterm election campaigns already underway, border security is sure to be a hot-button issue as voters head to the ballot box next November.