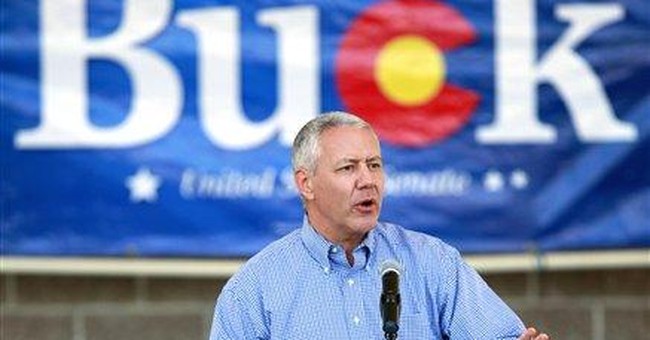 Buck, who proudly represents Colorado’s 4th congressional district in the House of Representatives, has been a staunch proponent to pass legislation targeted at the “Big Four;” Facebook, Google, Amazon, and Apple. Ongoing business practices, such as acquiring direct competitors and undermining smaller businesses that utilize Big Tech platforms for their revenue, have put the companies under bipartisan scrutiny by lawmakers in Washington D.C., including fellow Colorado lawmaker Joe Neguse (D-CO).

“We have four corporations in America who act like oligopolies and they are run by oligarchs. And the oligarchs are really crushing competition in the marketplace,” Buck told Townhall in an interview. “The result is that innovation is hurting and we need to foster innovation if we are going to stay ahead in the world marketplace.”

Each bill; the “State Antitrust Enforcement Venue Act,” the “American Innovation and Choice Online Act,” the “Platform Competition and Opportunity Act,” the “Ending Platform Monopolies Act,” the “Augmenting Compatibility and Competition by Enabling Service Switching (ACCESS) Act,” and the “Merger Filing Fee Modernization Act,” came as a result of a 16-month long investigation conducted by the committee that unearthed the unrestrained power the Big Four possessed in the digital marketplace.

“These four corporations are strongly opposed to these bills,” said Buck. “They are going to do everything they can to kill these bills.”

This does not come as a surprise, as one bill at the forefront is the “State Antitrust Enforcement Venue Act,” which would give state attorneys general home-field advantage in antitrust litigation. In recent months, several state attorneys general have sued members of the Big Four, including the District of Columbia’s Attorney General Karl A. Racine. State attorneys general would have the ability to select a venue for court and not have their case switched to a court the defendant prefers.

“The way the Clayton Act was written in 1913, it gave the United States the ability to pick a court that it wanted to sue in. But the attorneys general were lumped in with private parties,” said Buck. “This gives the attorneys general the same ability as the federal government to just file in one jurisdiction and stay there.”

Another piece of legislation that would significantly pull in the reins on the Big Four is the “Platform Competition and Opportunity Act,” which would prohibit Amazon, Facebook, Apple, and Google from acquiring their competitors. Examples of this in recent years include Facebook’s acquisitions of Instagram and WhatsApp and Google’s acquisition of YouTube. Companies in the Big Four would be required to show evidence in court that the businesses they acquire do not pose a competitive threat.

“We need to make sure that we are doing everything we can to make the marketplace as competitive as possible, and that’s what this bill requires is the company to prove that it is a pro-competitive merger,” said Buck of the bill.

Also regarding competition, the “American Innovation and Choice Online Act,” targets the Big Four, namely Amazon. This bill would prohibit Big Tech from self-preferencing their own products and picking and choosing “winners and losers” on their platforms. This bill applies to Apple in regards to the App Store as well. Independent, small businesses must compete with corporations who self-preference their own products and have the ability to plummet sales for smaller brands who utilize the platform to make sales.

“There’s not five Amazons – they control the retail marketplace, and they can discriminate against somebody and put them out of business,” said Buck. “What happens in that situation when you go the next step is investors don’t invest in startup companies when they know that the startup company, if it’s successful, will be crushed by Amazon.”

But, not all the bills pertain solely to small businesses or state government. The “ACCESS Act,” for one, would require interoperability between communication platforms so that users can easily transfer their data to competitors. Users who choose to abandon a platform like Facebook could easily move their content to another similar service.

In an era where Big Tech can jeopardize users’ privacy, move cases to favorable courts, and can acquire or crush competition, these bills guarantee Americans will have opportunities to grow their online businesses, state attorneys general can sue the corporations on their home turf, and everyday Americans will have ownership of their digital content, as well as other things.

In the wake of the investigation and the onset of these bills, it’s no surprise that Buck announced he has stopped accepting donations from Facebook, Google, and Amazon.