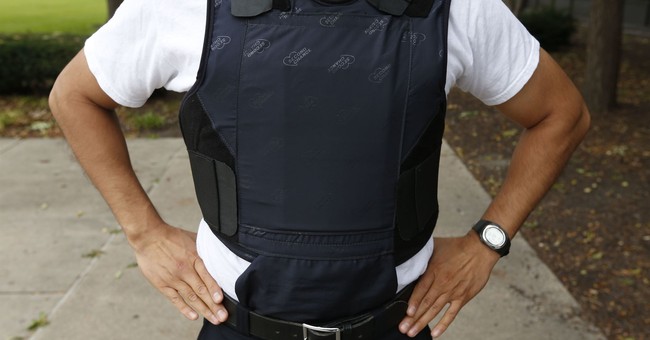 New York Governor Kathy Hochul (D) signed a law earlier this month restricting the sale of "bullet resistant soft body armor" as a response to the shooting that occurred in Buffalo last month. However, the law does not restrict the sale of the type of body armor the Buffalo shooter wore.

Hochul's legislation, which even the AP called "hastily enacted," contains a hodge-podge of new restrictions on both the purchase and the use of firearms and other items, like protective body armor. The changes include revisions to red flag laws, new requirements for licensing and restrictions on the sale of body vests to people in certain professions.

The random spread of bills demonstrates how Hochul and other New York Dems are scrambling to restrict the ability of their constituents to protect themselves.

The type of soft body armor the bill refers to can be hidden under clothing and it can protect wearers from pistol fire. Heavier-duty armor with steel, ceramic, or polyethylene plates can protect from rifle rounds. The law also only specifies a restriction placed on "body vests" which New York penal law defines as a "bullet-resistant soft body armor" and says nothing about other types of armor or protective clothing.

The Buffalo shooter, whose crime this legislation is in response to, did not even wear the type of body armor Hochul is restricting — he wore a heavier-duty steel-plated vest which stopped fire from the security guard who shot him. So the bill, which in a roundabout way is meant to curb the effects of crimes like the Buffalo shooting, does not have anything to do with the type of protective equipment the killer used.

The bill lists a few professions that are exempt from the restrictions, including police officers, peace officers, and persons in military service, but beyond that, it's vague about exempt professions (via the New York Senate):

There are some professions that benefit from the use of body armor that are not listed among those exempted from the new legislation (via AP):

The leaders of the Deadline Club, the New York City chapter of the Society of Professional Journalists, had urged Hochul to veto the bill citing concerns about whether it would make it tough for news organizations to buy armor for journalists who work in conflict zones or cover civil unrest in the U.S.

“I know a number of photographers who have worn protective gear as a precautionary measure while out in situations that may get violent,” said Peter Szekely, the group’s advocacy chair.

Private individuals are also restricted from purchasing body armor under this new bill.

Knowing the state of New York, which has heavy-handed restrictions on licensing requirements for both the possession and carry of firearms, it will likely be difficult to get other professions beyond the ones listed in the bill approved for exemption.

For firearm licensing, the state says eligibility hinges on having a “legally recognized reason for wanting to possess or carry a firearm” which a law firm in New York says would be “someone whose life is in imminent danger — supported by a restraining order against another person — and needs self-protection.”

In other words, you must already be in danger before you can even think about purchasing or carrying a firearm to defend yourself in the state of New York.

Brad Pedell, who runs a tactical gear and body armor store in New York City, told the AP that his customers tend to prefer hard-plated armor over soft, but only the latter is impacted by this legislation (via AP):

Pedell says many customers at his New York City store buy the armor for their own protection.

“It’s disappointing because residents are just scared, and they come to us because they are scared, and we offer help that makes them feel more confident, that they won’t get stabbed or injured or potentially killed,” Pedell said. “The fact (lawmakers) are taking that away, for whatever purpose they have in their minds, I find that really sad and unnecessary and morally wrong.”

The only people this law will really hurt are law-abiding citizens who want to protect themselves. It will protect very few criminals from facing justice — the Violence Project, which has a database on mass shootings, reported only 12% of recorded mass shooters since 1966 wore body armor during their attacks.

New York legislators don't want to stop at this. One said to the AP that he would "be glad to amend the law to make it even stronger" and wants to limit the already limited options of people seeking protective clothing.