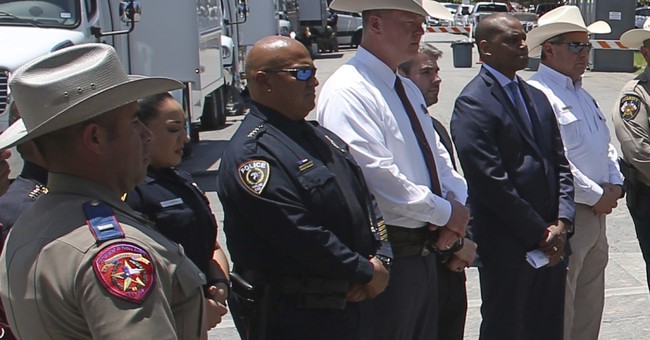 "From the beginning of this horrible event, I shared that the district would wait until the investigation was complete before making personnel decisions," Harrell wrote. "Today, I am still without details of the investigations being conducted by various agencies. Because of the lack of clarity that remains and the unknown timing of when I will receive the results of the investigations, I have made the decision to place Chief Arredondo on administrative leave effective on this date."

“I have made the decision to place Chief Arredondo on administrative leave effective on this date,” Dr. Hal Harrell said. pic.twitter.com/KlWijDIO9p

Arredondo, who entered the school minutes after the shooter, has been roundly criticized for his response to the incident. Officers reportedly waited more than 70 minutes to take out the gunman.

"There's compelling evidence that the law enforcement response to the attack at Robb Elementary was an abject failure and antithetical to everything we've learned over the last two decades since the Columbine massacre," McCraw told a Texas Senate committee this week.

Recommended
AOC Compares Getting Her Nails Done to the Reversal of Roe v. Wade
Sarah Arnold

"Three minutes after the subject entered the west building, there was a sufficient number of armed officers wearing body armor to isolate, distract, and neutralize the subject."

Arredondo testified behind closed doors Tuesday before a Texas House committee. Publicly, however, he has only told the Texas Tribune that he "didn't issue any orders" that day, nor did he consider himself incident commander, Fox News reports.

Share this on Facebook
Tweet
AOC Compares Getting Her Nails Done to the Reversal of Roe v. Wade
Sarah Arnold
Ex-Obama Adviser: Things Are 'Out of Control' Because Biden Is Not 'In Command'
Matt Vespa
American Airlines Leaves Thousands Stranded Ahead of July 4 Weekend
Sarah Arnold
Supreme Court Marshal Calls on Officials to Enforce Laws Banning Protests Outside Justices’ Homes
Sarah Arnold
New Yorkers Will Have to Provide Social Media Accounts in Order to Buy a Gun
Sarah Arnold
A Potential 2024 Trump Announcement Could Come This Month
Sarah Arnold
CARTOONS | Gary Varvel
View Cartoon
Most Popular