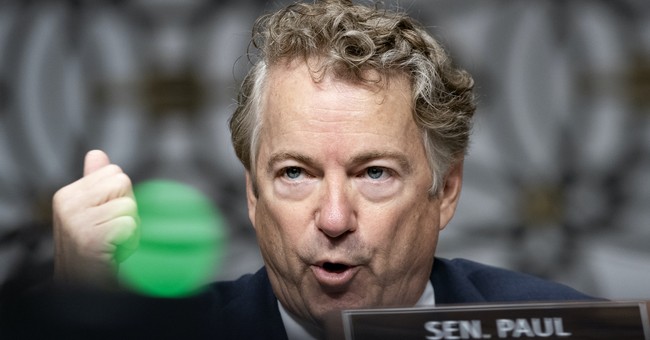 Sen. Rand Paul (R-KY) and Dr. Anthony Fauci had a sharp exchange on Thursday during a Senate hearing about the current status of the federal government’s response to COVID-19.

Paul wanted to know more information about royalty payments scientists at the National Institutes of Health have received.

“Can you tell me that you have not received a royalty from any entity that you ever oversaw the distribution of money in research grants?” he asked.

Fauci wasn’t sure but sternly said he doubted it.

Paul pressed the National Institute of Allergy and Infectious Diseases director since the NIH “refuses” to divulge identifying information about the scientists who received royalties.

“Here's what I want to know. It's not just about you,” he continued. “Everybody on the vaccine committee. Have any of them ever received money from the people who make vaccines? Can you tell me that?”

"Sound bite number one—Are you going to let me answer a question?" Fauci said as Paul continued to speak.

“OK, so let me give you some information. According to the regulations, people who receive royalties are not required to divulge them even on their financial statement, according to the by Bayh-Dole Act,” Fauci answered. “So let me give you some examples, from 2015 to 2020 I – the only royalties I have was my lab and I made a monoclonal antibody for use in vitro reagent that had nothing to do with patients. And during that period of time, my royalties ranged from $21 a year, to $1,700. And the average per year was $191.46.”

Paul pushed back, however, explaining that important details were redacted.

“It's all redacted and you can't get any information on the 18,000 scientists,” he said. “So we want to know whether or not people got money from the people who made the manufacturing of vaccines.”

Undisclosed royalty payments are a conflict of interest, no matter what Tony Fauci says. Having him as de facto head of covid policy and also in charge of billions of dollars for gov't grants to scientists is also a conflict of interest. Why are gov't ethics watchdogs silent? https://t.co/MkfLTHNpKW

That would be a yes

The creaking ugly edifice of medical misinformation is starting to crumble… https://t.co/9vzhqp85fL

They are bought and paid for. https://t.co/yXTLXak09o

However bad you think the corruption is, it’s worse than that. Fauci should be in prison. https://t.co/dN3HXP8IbO