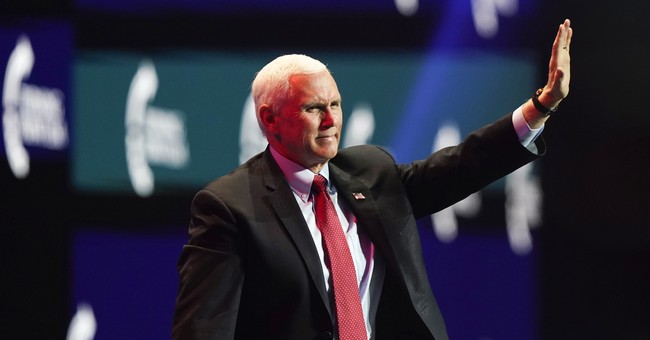 Former Vice President Mike Pence appears very interested in launching a presidential run if his recent moves are any indication. According to The New York Times, Pence has delivered high-profile speeches in early nominating states, he's publicly spoken against former President Trump’s efforts to overturn the 2020 election results, and last month, he visited the memorial to Heather Heyer in Charlottesville, Va. Now, he’s taken his “boldest” step yet in challenging Trump.

On the eve of Georgia’s primary, the former vice president will stump with Gov. Brian Kemp, perhaps the top target of Mr. Trump’s 2022 vengeance campaign against Republicans who didn’t bow to his election lies.

Mr. Pence grew close with Mr. Kemp during the pandemic and 2020 campaign, and now he is lining up against Mr. Trump’s handpicked candidate, former Senator David Perdue. But more than that, Mr. Pence is seeking to claim a share of credit in what’s expected to be the starkest repudiation yet of Mr. Trump’s attempt to consolidate power, with Mr. Kemp widely expected to prevail. (NYT)

While Pence and Trump have not spoken in some time, they are now carrying out a “proxy war” in Georgia.

A spokesman for Trump lashed out at Pence ahead of the former VP’s efforts to help Kemp in Tuesday's primary.

“Mike Pence was set to lose a governor’s race in 2016 before he was plucked up and his political career was salvaged,” spokesman Taylor Budowich, told the Times. “Now, desperate to chase his lost relevance, Pence is parachuting into races, hoping someone is paying attention. The reality is, President Trump is already 82-3 with his endorsements, and there’s nothing stopping him from saving America in 2022 and beyond.”

When asked last month about 2024, Pence wouldn't rule out a run, according to the Times, even if Trump is in the field.

“We’ll go where we’re called,” he said, referring to prayer. "That’s the way Karen and I have always approached these things.”