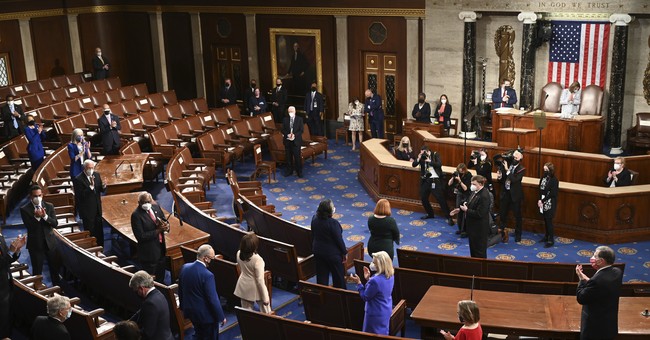 The House overwhelmingly supported sending $40 billion in aid to Ukraine on Tuesday, 368-57, prompting a harsh reaction from critics given the multiple crises that are going unaddressed at home.

Particularly, conservatives took issue with the 149 Republicans who joined every single Democrat in passing the bill while inflation continues to soar, the border crisis is ongoing, and our nation’s most vulnerable population—infants—can’t get the food they need.

No Democrats and only 57 Republicans voted against a spending package to send $40 billion -- $40 BILLION -- to Ukraine. More than even the massive amount Biden requested. https://t.co/dSi7ZnFHhY

We have unlimited money for bombs and abortions but we can't even prevent incursions or feed our own babies. What happened to our great country?

70% of elected the House GOP

40 billion for Ukraine is a turning point in America. No more pretenses. The people in charge are criminals.

70% of elected House Republicans in Washington DC voted to send $40,000,000,000 to Ukraine in the middle of record inflation, a border invasion, and a baby formula shortage in America.

“The American ppl do not support paying for constant U.S. involvement in foreign affairs while our own gov fails our own country!”pic.twitter.com/IvDXJa2WEC

$40 Billion to protect Ukraine's border? Congress won't even give $5 Billion to secure our own border.

Moms across America can't find baby formula on the shelves right now. When are we going to start putting Americans first? https://t.co/r98YKpyKIB

Congress is jamming through ANOTHER massive spending bill that its members haven't had time to read.

Full List Of Every Member Of Congress Who Voted Yes pic.twitter.com/dgGPX4mAsn

"Building on robust support already secured by Congress, this package will help Ukraine defend not only its nation but democracy for the world," she said. "As Putin desperately accelerates his brutality in Ukraine, time is of the essence. This urgent package includes military aid, support for the Ukrainian economy, and humanitarian assistance for food security to address the worldwide hunger crisis stemming from Putin’s invasion.

"With this aid package, America sends a resounding message to the world of our unwavering determination to stand with the courageous people of Ukraine until victory is won," she added.

Senate Majority Leader Chuck Schumer vowed to “move swiftly” on the package in the Senate.