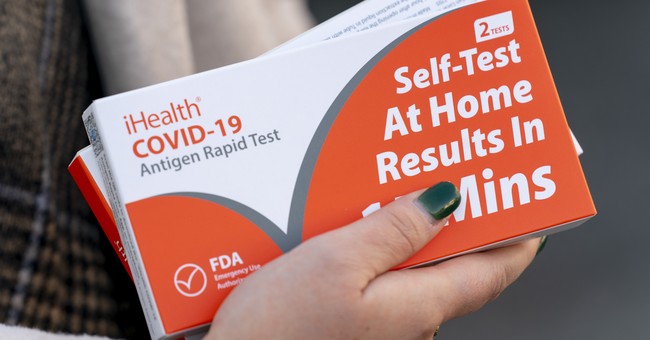 As Americans begin receiving their “free” Covid-19 tests from the U.S. government, people have started to point out that their kits say they were Made in China.

“I almost choked when I saw that,” commented RedState’s Nick Arama. “It’s almost impossible to find a test at a pharmacy, you can only get them from the government in an ineffective time if you are sick and then they’re from China? The people Joe Biden hasn’t even held accountable in any way for what they’ve done regarding COVID? So is Joe Biden is making China rich with these “free tests?” This is just incredible.”

Fox News’s Bill Hemmer brought the issue up on Tuesday. While he praised the government and postal service’s speed in getting him the test kits, the four iHealth Labs Inc. kits said on the back of the box they were made in China.

iHealth is a unit of the Chinese company Andon Health Co. Ltd., according to Reuters. It was awarded a $1.275 billion contract for COVID-19 rapid tests with the U.S. government on Jan. 13, according to the Defense.gov website. (Fox News)

A Biden administration official told Fox News that given the volume of tests needed, they couldn’t all have been made in America.

"We are procuring as many US-made at-home tests as are available to purchase, while also purchasing additional, FDA authorized at-home tests that are made in other parts of the world," an administration official told Fox News Digital. "Together this ensures that we are making available as many at-home tests for the American people as possible and importantly, we’re doing so in a way that ensures we are not interfering with other channels where people can get at home tests, including through their states, pharmacies and online retailers."

"Importantly, every at-home test that is available to the American people has underwent a rigorous FDA approval process guaranteeing that it is of the highest quality," the official added.

Got my “free” COVID tests. What a joke. Not only are they made in China but the “sealed” tube was open and went everywhere. Theoretically, I could only use one test because of the lack of solution. ?? pic.twitter.com/dn18DGhnsi

In a statement, Sen. Rick Scott (R-FL) said it was "unacceptable" that the administration "would spend American taxpayer dollars on COVID tests from Communist China, which just goes directly to supporting General Secretary Xi and his genocidal regime, instead of supporting American manufacturers and jobs."

The statement continued: "The federal government has a responsibility to support American manufacturers, and we cannot turn a blind eye to the fact that it was the Chinese Communist Party that lied about this deadly virus, tried to hide it, and has continuously covered up the origins of COVID-19."