Biden Goes Off on the Unvaccinated. But There Are Some Problems with What He Said. 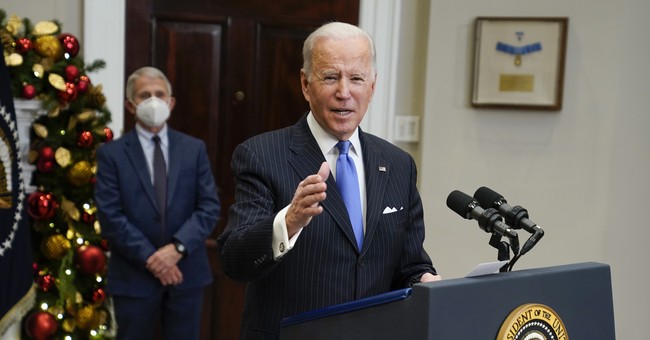 President Biden once again sounded off on the unvaccinated Tuesday and dismissed concerns about his vaccine mandates encroaching on individual freedoms.

His comments came after a WHIOTV 7 reporter asked about the recent setbacks in federal court three of his vaccine mandates have had recently.

“What about that?” Biden continued. “What’s the big deal?”

Aside from the fact that Biden completely dismisses individual liberty, he's also wrong on two points. First, according to the Centers for Disease Control and Prevention, the fully vaccinated who "become infected with the Delta variant" can still "spread the virus to others."

Secondly, Biden has repeatedly made the argument that America is in the midst of a pandemic of the unvaccinated, but as The Atlantic pointed out recently, Covid-19 is everyone’s problem.

Unvaccinated Americans will certainly pay the steepest price in the months to come. But with winter setting in and Omicron looming, the pandemic of the vaccinated can no longer be denied, @rachgutman writes. https://t.co/cqf65DF1jQ

Back in July, CDC Director Rochelle Walensky announced that COVID had become "a pandemic of the unvaccinated," an unfortunate turn of phrase that was soon picked up by the president. Now the flaws in its logic are about to be exposed on what could be a terrifying scale. Unvaccinated Americans will certainly pay the steepest price in the months to come, but the risks appear to have grown for everyone. The pandemic of the vaccinated can no longer be denied.

The 60 percent of Americans who are fully vaccinated could soon find their lives looking very different. For much of the summer and fall, those who had received two Pfizer or Moderna doses or one Johnson & Johnson shot were told that they were essentially bulletproof, especially if they were young and healthy. But preliminary data from South Africa and Europe now suggest that two vaccine doses alone might still allow for frequent breakthrough infections and rapid spread of the disease—even if hospitalization and death remain unlikely. Getting three shots, or two shots plus a previous bout of COVID, seems to offer more protection. For Saad Omer, the director of the Yale Institute for Global Health, that’s enough evidence to justify changing the CDC’s definition of full vaccination. “With Omicron and the data emerging, I think there is no reason why we shouldn’t have a pretty strong push for everyone to have boosters,” he told me.

At this point, the CDC has recorded that less than a quarter of adults who are fully vaccinated under the existing definition have gotten a third shot. That leaves about 150 million people who are vaccinated but unboosted. Given that the people in this group are less protected against infection, they’re at greater risk of passing on the disease to unvaccinated or partially vaccinated kids, as well as to unvaccinated or immunologically vulnerable adults. They will also pass the coronavirus more readily among themselves. Settings that might have previously seemed safe for vaccinated folks—say, a restaurant or performance venue that strictly checks vaccination status—could become fertile ground for transmission, because the people inside them are more likely to catch and spread the virus. Indeed, anecdotal reports already suggest that large indoor gatherings of fully vaccinated people can become super-spreader events in the age of Omicron. (The Atlantic)

A separate Atlantic piece from September also pointed out how unproductive it is for the president, who once pledged to unite Americans, to continue “bullying” the unvaccinated because it creates “tension” and “resistance” when groups get pitted against each other.