NYT Excoriated for Claim About Why Omarova Withdrew Nomination 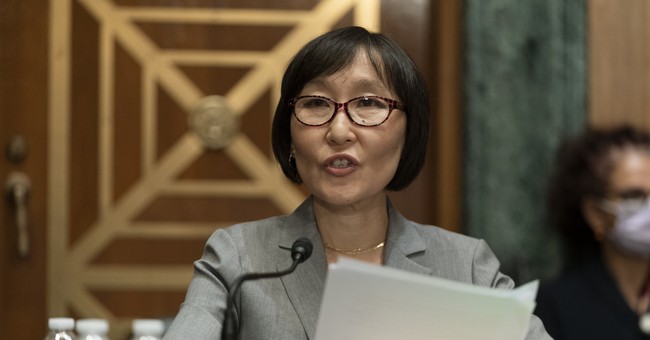 The New York Times was criticized over its report on Saule Omarova, President Biden’s controversial nominee to lead the Office of the Comptroller of the Currency, who backed out on Tuesday.

Rather than acknowledging Omarova’s radical positions, like advocating for “effectively end[ing] banking as we know it,” or her refusal to turn over her thesis on Marxism, the Times instead blamed her critics for “painting” her as a communist because she was born in the Soviet Union.

"Saule Omarova, a Cornell Law professor whom President Biden picked for a key banking regulator job, is withdrawing from consideration for the post," the Times said in a tweet. "Bank lobbyists and Republicans painted her as a communist because she was born in the Soviet Union."

Atrocious tweet, @nytimes. She was blocked because of her publicly held, outwardly radical views. Do better https://t.co/ewJj0DzsG0

Also that she espoused views that would’ve fit back in the USSR. (I mean, I was born there, but pretty sure if I ever have a confirmation hearing, nobody will say I’m a commie.) https://t.co/eBjcFkFtTy

Maybe she was painted as a communist because she is alum of Moscow State University and wrote a thesis on Marxism she refused to turn over. https://t.co/GdD6kydhg5

I think it had less to do with her birth place and more to do with the fact she published a paper in October arguing private bank accounts should be replaced with "FedAccounts" that the government can add or subtract money from at will to achieve political ends. https://t.co/Qdd5UgaLNg pic.twitter.com/4QTowO8kpC

Omarova is accurately painted as a communist because she’s literally a communist, irrespective of where she was born, you pathetic, lying propagandists. Absolute enemy of the people. https://t.co/NXjYVUVrFW

Pretty standard stuff for The NY Times these days. Gaslight and frame around "racist Republicans say.." then 11 graphs in, bury the truth so the story can still be labeled technically accurate . https://t.co/J2PxcQ3aIr pic.twitter.com/At9oGjVP1S

Why would these degenerates even attempt a lie like this when everyone can watch the videos? https://t.co/OGxvrgy8IH

This report claims lobbyists shared "a Wall Street Journal editorial suggesting that Ms. Omarova’s Soviet childhood meant that she could not be trusted."

Here's the line from the op-ed they are referring to (notice how it doesn't say that and that she's an *adult*): https://t.co/fv8wpexOKy pic.twitter.com/p7IFxon6vq