After Blasting CRT, Condi Rice Is Now Being Called a 'Foot Soldier For White Supremacy' 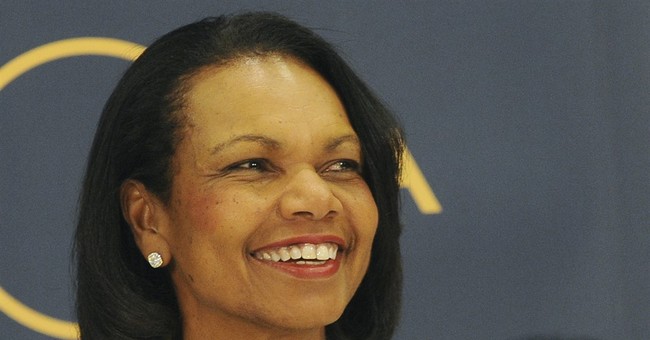 Watch out, Larry Elder—“the black face of white supremacy”—you’ve now got some competition from Condoleezza Rice, a “foot soldier for white supremacy.”

Condoleezza Rice’s recent appearance on The View was offensive and disgusting for many reasons, but she was who we thought she was: a soldier for white supremacy. Her thoughts on Critical Race Theory are completely white centric, as in, they revolve around the thoughts and needs of white people.

Also this — white children and adults should absolutely feel bad about the past atrocities committed by white Americans. They should feel guilty. They should cringe at what their ancestors did. They should also understand that modern white power is directly related to those atrocities. White people gained economic and institutional advantages from slavery and segregation and the long-term subjugation of Black people that continue to help them to this day. (The Grio)

In reality, the former secretary of state spoke about how she grew up in segregated Birmingham and yet her parents raised her to understand that racism is society’s problem, not hers, and that she could “overcome it”—a far different message than what schoolchildren across the country are being taught with CRT, with blacks trapped in victimhood status and whites condemned as oppressors, regardless of guiltlessness. And Condi called them out for it.

"One of the worries that I have about the way that we're talking about race is that it either seems so big that somehow white people now have to feel guilty for everything that happened in the past — I don't think that's very productive — or black people have to feel disempowered by race," Rice said.

"I would like black kids to be completely empowered, to know that they are beautiful in their blackness,” she continued, "but in order to do that I don't have to make white kids feel bad for being white. So somehow, this is a conversation that has gone in the wrong direction.”

During the show, Rice was very clear that she believed history, even uncomfortable history, should be taught, but how it’s taught is key.

“We teach the good, and we teach the bad history. But what we don’t do is make 7 and 10-year-olds feel that they are somehow bad people because of the color of their skin. We’ve been through that, and we don’t need to do that again.”

It was only a matter of time pic.twitter.com/3ZSIK8SoKl