Manchin Explains the Condition Under Which He'd Leave the Democratic Party 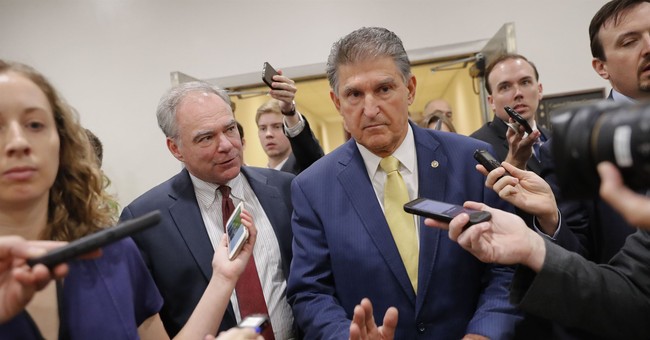 One day after blasting rumors that he was leaving the Democratic Party, calling the reports “bullsh*t,” West Virginia Sen. Joe Manchin explained the condition under which he would leave his party, though he has no intentions of doing so at this time.

“What he reported is simply untrue,” Manchin told The Hill about the rumor, which began after Mother Jones reported he told colleagues he’d leave the party if the price of the reconciliation package didn’t come down to $1.75 trillion from $3.5 trillion.

“I’m not threatening to leave. Why would I? I’m very secure in my positions and honestly, I’m not the one stressed out,” Manchin said.

He did explain the condition under which he would leave party, however.

Manchin said he had told Biden, Senate Majority Leader Charles Schumer (D-N.Y.) and his caucus that if it would help them "publicly" for him to become an Independent who still caucuses with the party, as they face pressure from activists to craft a bill as large as possible, he was willing to do so.

“What is true,” Manchin told The Hill, “is that I have told the president, Chuck Schumer, and even the whole caucus that if it is ‘embarrassing’ to them to have a moderate, centrist Democrat in the mix and if it would help them publicly, I could become an Independent — like Bernie — and then they could explain some of this to the public saying it’s complicated to corral these two Independents, Bernie and me.” (The Hill)