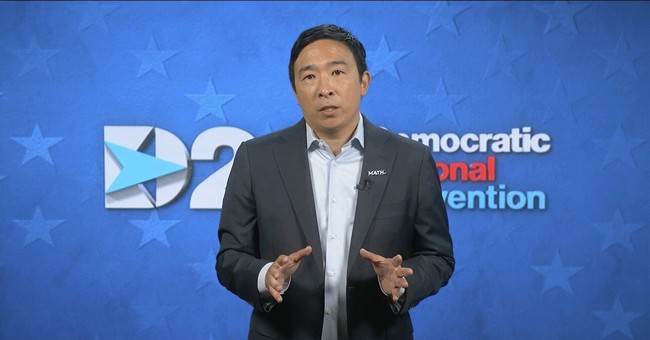 Former Democratic presidential candidate Andrew Yang announced Monday he is “breaking up” with his party.

Yang switched his voter registration to “Independent” in what he called a “strangely emotional experience.”

In a statement explaining his decision, Yang recalled how he registered as a Democrat in the 1990s and was a “staunch Democrat” throughout his life, voting for Bill Clinton, fundraising for John Kerry, supporting Barack Obama, and then in 2016 donating to Bernie Sanders’s campaign and ultimately casting his vote in that election for Hillary Clinton.

He spoke about the thousands of Democrats he met across the country when he ran for president and the friendships he made with left-leaning activists and elected officials along the way.

“I have at this point dozens of friends and confidantes who are entrenched in the Democratic Party. I’ve been a Democrat my entire adult life,” he wrote. “And yet, I’m confident that no longer being a Democrat is the right thing.”

He then explained what led him to walk away.

So why do I feel in my heart that this is the right move?

While it was simply a small piece of paperwork, I genuinely felt a shift in my mindset as soon as I signed it.

My goal is to do as much as I can to advance our society. There are phenomenal public servants doing great work every day – but our system is stuck. It is stuck in part because polarization is getting worse than ever. Many of the people I know are doing all of the good they can – but their impact is constrained. Now that I’m not a member of one party or another, I feel like I can be even more honest about both the system and the people in it.

The key reform that is necessary to help unlock our system is a combination of Open Primaries and Ranked Choice Voting, which will give voters more genuine choice and our system more dynamism. It will also prevent the spoiler effect that so many Democrats are concerned about, which is a byproduct of a two party system with a binary contest and simple plurality voting.

I believe I can reach people who are outside the system more effectively. I feel more . . . independent.

Also, on a personal level, I’ll admit there has always been something of an odd fit between me and the Democratic Party. I’m not very ideological. I’m practical. Making partisan arguments – particularly expressing what I often see as performative sentiment – is sometimes uncomfortable for me. I often think, “Okay, what can we actually do to solve the problem?” I’m pretty sure there are others who feel the same way I do. (AndrewYang.com)

Yang concluded that he feels he can accomplish more and have a "greater impact" outside the Democratic Party.

Whether that happens remains to be seen.