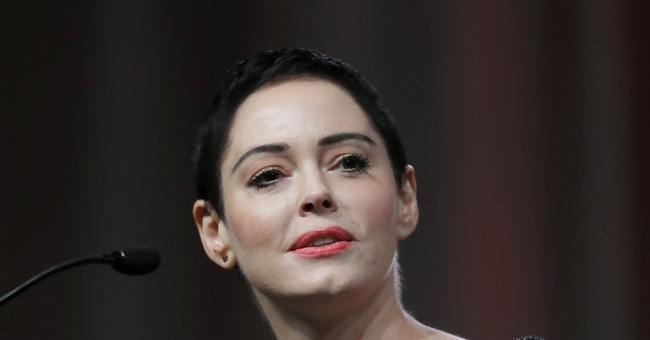 Actress Rose McGowan blasted Democrats during an appearance with California gubernatorial candidate Larry Elder on Sunday, saying she no longer considered herself one because all the people who have “harassed, stalked, and stolen” from her in Hollywood have been Democrats.

At press conference with @larryelder, @rosemcgowan says, “I finally came to a point where I am not a Democrat, because everyone who has harassed, stalked, and stolen from me in my time in Hollywood has been a Democrat."

McGowan, who endorsed Elder despite having some different views on certain policies, said the leading GOP challenger is "the better candidate and the better man."

“Do I agree with him on all issues? No. But he is the better candidate & the better man.” @rosemcgowan endorses @larryelder. Says she listened to his radio show for years & used to call in & debate with a fake name. pic.twitter.com/NanFmi8vRO

She also spoke about how Gov. Gavin Newsom’s wife allegedly tried to stop her from speaking out against Harvey Weinstein in 2017.

In an interview last week, McGowan described what happened: “So this woman, I don’t know, some blonde lady name with the last name of Newsom, cold-calls me, and was like, David Boies wants to know what it would take to make you happy.”

On behalf of Harvey Weinstein’s lawyer, the wife of Gavin Newsom, Jennifer Siebel Newsom, asked accuser Rose McGowan, “What would it take to make you happy”... pic.twitter.com/b787X6MN1I

A spokesperson for Jennifer Siebel Newsom has denied the allegations, calling them “complete fabrication.”

"It's disappointing but not surprising to see political opponents launch these false attacks just days before the election. Their limited correspondence has been strictly as fellow survivors of sexual assault and in Jennifer's former capacity leading the Representation Project, an organization that fights limiting gender stereotypes and norms," Siebel Newsom's spokesperson told Insider in a statement.

Elder has said he doesn't know whether McGowan's allegation is true, but he is certain that if the allegation were against his significant other, that the media would be reporting on it nonstop. Instead, there is radio silence.

"It's a double standard."@larryelder brings up allegations made by @rosemcgowan against Jennifer Newsom.

"I don't know if it's true...but if that allegation was made about my significant other...it would be all over the place....the mainstream media doesn't give a damn." pic.twitter.com/Nu7jfV5qf5