Rand Paul Is Serious About Holding Fauci Accountable. Here’s What Step He Took After New FOIA Docs Came Out. 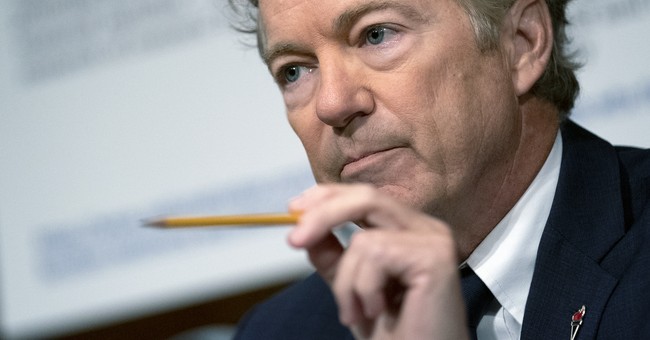 Sen. Rand Paul said Tuesday he has asked the Department of Justice to review Dr. Anthony Fauci’s testimony to Congress for possible perjury, a move that comes after new documents have revealed U.S. funding of gain-of-function research at the Wuhan Institute of Virology, where some believe the novel coronavirus originated.

Fauci has denied during testimony that the National Institutes of Health ever funded gain-of-function research in Wuhan.

.@RandPaul: "Dr. Fauci, do you still support...NIH funding of the lab in Wuhan?"

Dr. Anthony Fauci: "Senator Paul, with all due respect, you are entirely and completely incorrect..."

Documents obtained through a Freedom of Information Act request by The Intercept show, however, that the NIH issued a “bat coronavirus grant” to EcoHealth Alliance, a U.S.-based health organization, for “$3.1 million, including $599,000 that the Wuhan Institute of Virology used in part to identify and alter bat coronaviruses likely to infect humans.”

And I was right about his agency funding novel Coronavirus research at Wuhan.

Read this thread and the papers released. https://t.co/zQizKXLdbd

The documents make it clear that assertions by the NIH Director, Francis Collins, and the NIAID Director, Anthony Fauci, that the NIH did not support gain-of-function research or potential pandemic pathogen enhancement at WIV are untruthful.

Speaking to Fox News' Sean Hannity about the development, the Kentucky Republican said lying under oath is a "felony punishable by five years in jail," and that he's already referred the matter to the DOJ.

"I don’t think Biden’s Department of Justice will do anything with it but yes, it is very dangerous to have public officials who we need to have trust in coming and lying to us, but he has lied dozens of times," Paul said. "Usually, he tells us that it’s for our own good but yes, he has ... definitely lied to the American public and he should be held responsible but not just that. The judgment that we should continue to fund this lab and—that the virus in all likelihood came from the lab. I think it’s such incredibly poor judgment that he should be immediately removed."