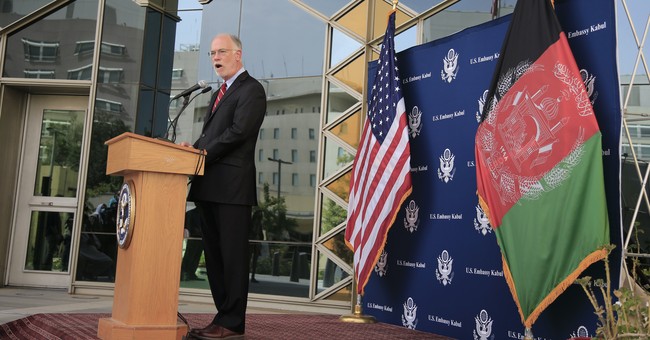 Ross Wilson, acting U.S. ambassador to Afghanistan, claimed Wednesday that the State Department issued repeated warnings for Americans to leave Afghanistan but they “chose not to.”

His comments came during an interview with CBS’s Norah O’Donnell, who asked about criticism towards the Biden administration that evacuation efforts didn’t begin much sooner.

“We put out repeated warnings every three weeks to Americans, going back to March or April, each one in stronger terms—'leave now, leave immediately,’” he said.

"Never in my 40 years of working, since I began working at the State Department, have I seen such strong language used,” Wilson continued. “People chose not to leave. That's their business. That's their right."

"We regret now that many may find themselves in a position that they would rather not be in. And we are determined to try to help them,” he added.

Top U.S. diplomat says the State Department put out repeated warnings every three weeks to Americans in Afghanistan telling them to leave since April: “People chose not to leave. That's their business," Ross Wilson said. pic.twitter.com/hr5HlLxA0F

As Guy pointed out, it was only last month that President Biden said “the likelihood there’s going to be the Taliban overrunning everything and owning the whole country is highly unlikely.”

It’s their fault, you see. They believed POTUS when he said the Taliban wouldn’t overrun the country & the Sec of State said the embassy would remain fully operational — both of which happened a few weeks ago. https://t.co/1LO5XX0aFr

Others couldn't believe the administration really decided to stick with victim blaming.

Holy sh*t, this is really what they’re going with. https://t.co/iPGnzWqd3e

They’ve moved on to blaming the victims https://t.co/FHz9kxxMHw

WH strategy: We tried to warn you despite what we were saying publicly. https://t.co/GI7WDshTtM