'I Will Not Stand for These Shenanigans': Elder to Sue California's Secretary of State to Get on Recall Ballot 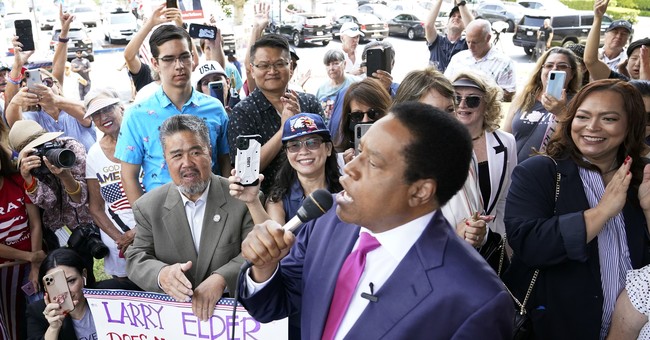 The conservative pundit’s name was kept off an initial candidate list reportedly over redaction issues with his tax returns.

He argued that even if there are some redaction issues, that should not be disqualifying. Indeed, according to Elder’s lawyers, it never has been a problem a candidate has been disqualified over in the past.

“Income tax returns are required under the election code to ensure ‘that its voters make informed, educated choices in the voting booth.’ The redactions required on tax returns include items such as social security number, home address, telephone number, etc,” Elder explained. “Should they not be redacted inadvertently, it would be an error that does not arise to a disqualifying factor. Furthermore, the Secretary of State could’ve made additional redactions if she determined my tax returns were insufficiently redacted.”

“Finally, this also violates the equal protection clause of Art. I, § 7, of the California Constitution not to require Governor Gavin Newsom to comply with the same tax return disclosure requirement,” he said.

Vowing to “not stand for these shenanigans,” the radio host said he’s suing the California Secretary of State “to honor the required items we submitted in order to run and to put me back on the ballot in the CA recall election.”

I'm suing the CA Sec. of State to honor the required items we submitted in order to run and to put me back on the ballot in the CA recall election. I will not stand for these shenanigans, and I know you won’t either. Will you chip in to back up our fight? https://t.co/4tZ5LcFwYc