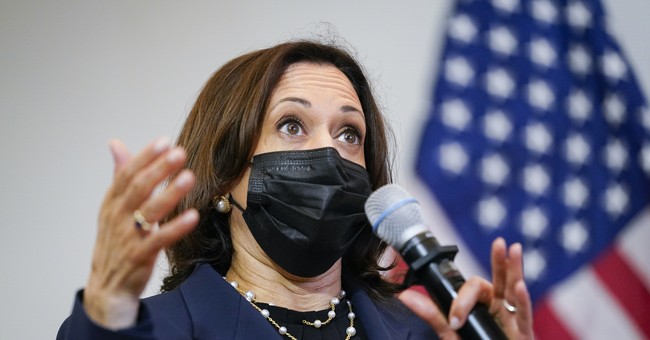 In 2020, then-Sen. Kamala Harris was among the 10 Democratic senators who signed a letter to former Acting Department of Homeland Security Secretary Chad Wolf, accusing the Trump administration of violating federal law in using the pandemic as justification for closing the border with Mexico.

As vice president, however, she now supports that provision, Politico reports.

The Biden administration has continued to use the Trump-era policy, often dubbed Title 42 in reference to the U.S. code, to effectively seal the border. It does so under the argument that migrants trying to cross could pose a health risk during the Covid outbreak.

More than 60 House Democrats are urging President Joe Biden to end the policy, saying it has no legal basis. Dozens of public health experts say it has “no scientific basis as a public health measure.” Immigration advocates have filed legal challenges as well.

But Biden hasn’t budged; and Harris remains one of several Democrats who was critical of former President Donald Trump but has stayed quiet as the administration faces accusations that it is using Title 42 to control immigration but not the pandemic. [...]

Harris’ silence on Title 42 illuminates the binds that she — and the Biden administration writ large — have faced upon taking office. Biden officials are trying to fulfill their campaign promises on immigration but have found that quickly reversing Trump’s policies can create an abundance of political headaches and contribute to a host of other problems, including trying to process and house a record number of unaccompanied children crossing the southern border. (Politico)

The Biden administration has extended the closure of the border between the United States, Canada and Mexico until at least May 21, 2021, reports National Law Review, a move that has angered immigration activists and Democratic lawmakers alike.

“It’s really inexplicable that the Biden administration continues to use this Trump-era Title 42 policy to block and expel asylum seekers to life-threatening dangers in Mexico and the countries they have fled,” Kennji Kizuka, associate director of research and analysis for Refugee Protection at Human Rights First, told Politico. “There's no public health basis or justification for the policy. There wasn’t one when the Trump administration began expelling people and there isn’t one now.”

Recommended
NYT: Enrollment in Public Schools Has Dropped by 1.2 Million Since the Pandemic, But We're Not Sure Why
Guy Benson

“While the Biden administration inherited an extremely challenging situation after years of inhumane border policy, I believe that ending this misuse of Title 42 should be a priority,” said Rep. Frederica Wilson (D-Fla.), reports Politico. “It is very hard for me to justify this inaction to my constituents as we await notification and an explanation from the administration.”