McCarthy Offers a Prediction About Republicans' Chances in 2022 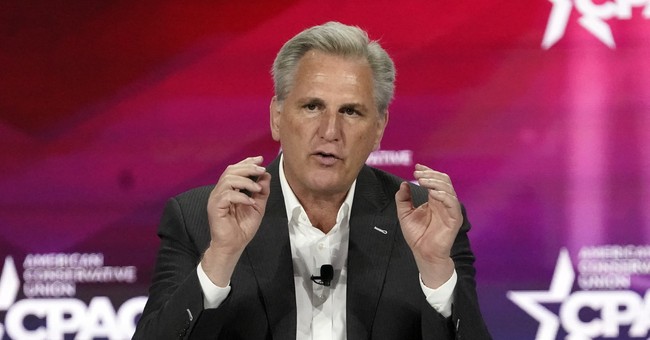 During an annual GOP retreat in Orlando, Florida, House Minority Leader Kevin McCarthy offered a prediction about the Republican Party’s chances of flipping the House in 2022.

“Our focus on this one has been different than the others,” he told reporters about their priorities at the retreat. “We're focused on policy and building a better America as we move forward.

“We believe Republicans will take the House in 2022,” he added. “Just for a refresher, so everybody knows, in the last election there wasn't one Republican incumbent to lose, first time since 1994. We were able to defeat 15 Democrats, every single Democrat lost to a Republican woman, a Republican minority, or a Republican veteran. We're very proud of that, we're proud of what we've been able to do."

That was a message echoed by other GOP leaders.

National Republican Congressional Committee Chairman Tom Emmer — who is tasked with leading the House GOP campaign arm’s strategy to win back the lower chamber — said he thinks it’s too early to project the number of seats they will pick up, but he’s bullish about their odds.

The Minnesota Republican noted that they far exceeded political forecasters’ expectations last cycle, where some projected they would lose 10-to-15 seats but defied the odds, making substantial gains that have led to Democrats holding the slimmest majority in modern history.

“It’s within grasp — the difference between the 213 and the 218 was 31,751 votes. I meant it when I said it after the election that I was disappointed that we did not win the majority as we had planned to do. Flipping the House for the first time in a two-year presidential cycle in over 50 years, that was the goal,” he told The Post.

“Yeah, there were some good things, but now here’s what we have to do — one, you must protect every incumbent and just like we did the last cycle, [it was the] first time every Republican incumbent returned since 1994, and then it’s making sure that we have a plan and we actually execute on that plan to pick up the seats we need to be in the majority, and then the message this morning, the added piece was once you have the majority you need to build a lasting majority.” (New York Post)

Emmer said the NRCC plans to link vulnerable Democrats to House Speaker Nancy Pelosi and the progressive agenda items she has embraced. Based on their own battleground polling, Pelosi has “never been more unpopular,” he claimed.

“It’s not just history where people want checks and balances but then yet on top of that, the far left agenda that President Biden’s pushing with Nancy Pelosi is out of touch with a lot of those suburban voters that we lost that are still with us on a lot of the issues that we’re going to be advocating for next year,” he said.