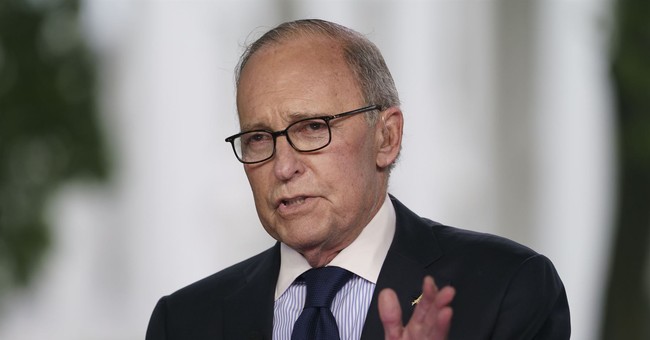 During the debut of his new program on Fox Business, former Trump economic adviser Larry Kudlow had to address a hot mic moment earlier in the day on Fox News in which he sounded off watching a clip of Vice President Kamala Harris discussing the government’s coronavirus vaccine distribution plan.

After chatting with Kudlow about his new weekday show, “America Reports” co-anchors Sandra Smith and John Roberts turned to a clip of Harris claiming the Biden administration was “starting from scratch” with its vaccine strategy.

Smith responded, pointing out that was “Larry Kudlow weighing in…wow.”

He later apologized for the hot mic moment.

"Earlier on Fox News Channel I made some comments about that clip,” he said on his show. “You might have read about it. If not, you can google it. I may have said a bad word. I’m not usually a guy who swears, but what the Vice President said just burned me up and it's simply not true, okay? It is somewhere between cognitive dissonance and an outright falsehood lie. And we generated, we, the Trump administration, not everything went perfectly. I sat on the task force. Operation Warp Speed was one of our greatest triumphs, and by the time of the inauguration, January 20th, the Trump efforts were generating 1.3 million vaccines per day, and as I may have mentioned earlier, right now the total volume of vaccines exceeds the total volume of cases. And don't tell me they started from scratch. That is simply wrong."

In January, Dr. Anthony Fauci confirmed that was not true: "We certainly are not starting from scratch because there is activity going on in the distribution."

"What I think the vice president is referring to is, the actual plan of getting the vaccine doses into people's arms was really rather vague. I mean, it was not a well-coordinated plan," he told CNN.