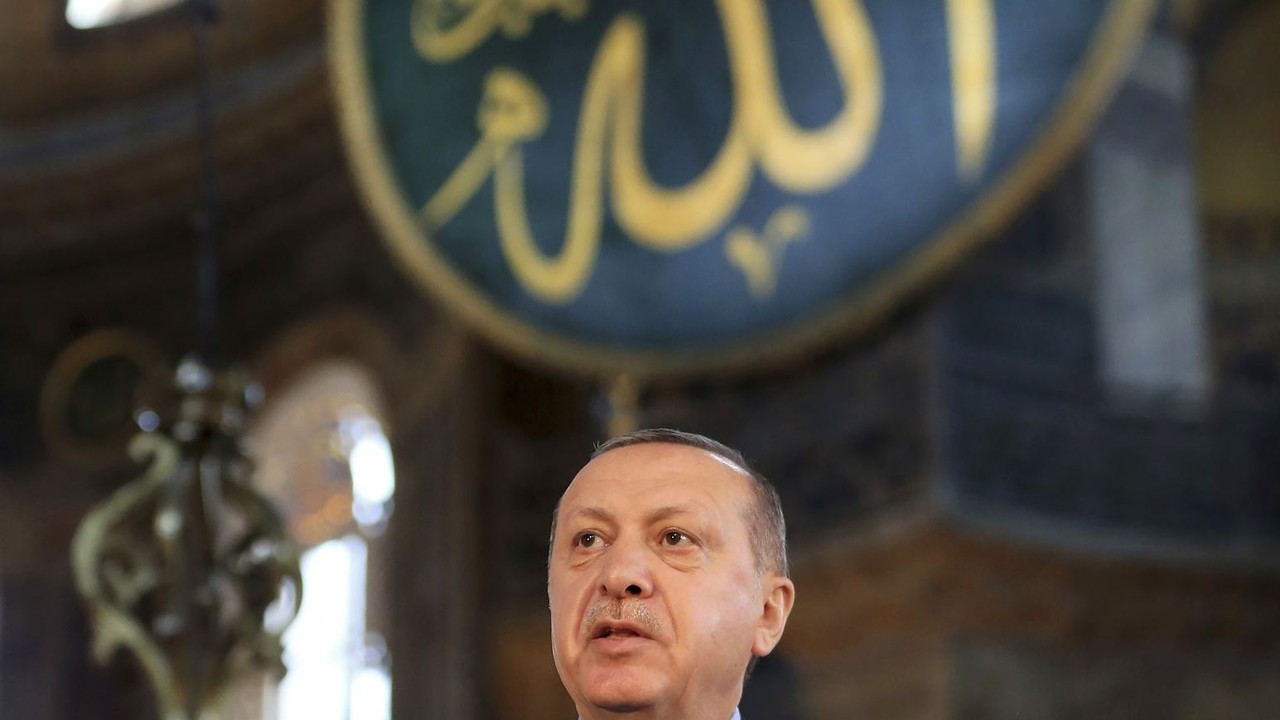 Christians worldwide are decrying Turkey's decision to turn Hagia Sophia, the sixth century Greek Orthodox church, into a mosque. But according to a Turkish media outlet, they have their sights set on much more.

The conversion marks the second time in Hagia Sophia's history that it will become a mosque—the first came after the 1453 Ottoman conquest.

Last week, a Turkish court ruled that its designation as a museum in 1934 under Mustafa Kemal Ataturk, the founding father of the Turkish Republic, was unlawful. President Recep Tayyip Erdogan then declared that it will again become a mosque.

Patriarch Kirill, the leader of Russia's Orthodox Church, said last week he was "deeply concerned" by the decision, calling Hagia Sophia "one of the greatest monuments of Christian culture."

"A threat to Hagia Sophia is a threat to the whole of Christian civilization, and therefore to our spirituality and history," Kirill said.

His Eminence Archbishop Elpidophoros, head of the Greek Orthodox church in the U.S., said he hopes the move "does not signal a deterioration of the stand of the Turkish government toward the Ecumenical Patriarchate and the other Christian minorities of Turkey, and a negative turn from respect for religious freedom."

He further called it the "worst example of religious chauvinism."

"By shuttering Hagia Sophia as a monument, Turkey has shut the window that Ataturk opened to the world," continued the archbishop, who grew up in Istanbul.

The re-conversion of Hagia Sophia into a mosque is the worst example of religious chauvinism. By shuttering Hagia Sophia as a monument, Turkey has shut the window that Ataturk opened to the world. #HagiaSophia

Pope Francis, meanwhile, said he was "very saddened" by the news.

The Greek prime minister, Kyriakos Mitsotakis, said the country is "considering its response at all levels" to the "unnecessary, petty initiative from Turkey." Sanctions are reportedly being considered.

"With this backward action, Turkey is opting to sever links with the western world and its values," Mitsotakis said.

.@PrimeministerGR K. Mitsotakis said that Turkey's repeated violations of Greece and Cyprus' sovereign rights in the Mediterranean, its "unnecessary and petty" decision to reconvert #HagiaSophia into a mosque "require a comprehensive European response". ?? https://t.co/AzcJmqI88T

Erdogan announced the first Muslim prayers will begin July 24. Icons and mosaics in Hagia Sophia will be covered with curtains and special lighting during prayer.

Hagia Sophia: Icons will concealed by curtains and lighting, tourists will be required to remove shoes https://t.co/N2lTKmI8Kn

When Archbishop Elpidophoros was asked by the BBC what the objection was given that nothing is stopping the Orthodox faithful from entering and "silently praying," he reminded that "worship is not a personal issue, it's a collective, it's a service."

He continued: "As a museum, we all could have access and pray, everybody, equally without any exception. We could all pray in that church. In a mosque, it's impossible. There is a certain ritual to enter a mosque. You have to take off your shoes, you have to wash your hands, you have to be a Muslim to pray. You cannot enter the Blue Mosque for example, and pray; you can't pray in the Blue Mosque as a Christian."

People around the world are expressing concern that Islamists will look at Turkey's decision as a first step in attempting to reclaim other sites.

The Genesis 123 Foundation, based in Israel, called it "a direct attack on Christians and Christian heritage in the Middle East" in a petition to "save the Hagia Sophia from Islamic Extremists."

"We call upon the government of Turkey to reverse its decision and maintain the Hagia Sophia as a world heritage site open to all. We call upon world governments to implore Turkey that they must reverse this action," Jonathan Feldstein, the president of the Genesis 123 Foundation, wrote.

Aykan Erdemir of the Foundation for Defense of Democracies said Erdogan is "once again asserting Islamic supremacism and domination on Turkey's ethnic and religious minorities." (FoxNews.com)

Turkish media has rejoiced over the move, saying Hagia Sophia has returned to its rightful owners.

TV Host on Turkish TV: Hagia Sophia Returned to Its Rightful Owners and the “People of Falsehood” Act as If They Have Mad Cow Disease; Hagia Sophia Today, the Al-Aqsa Mosque Tomorrow pic.twitter.com/sWwbBuFSSR

More ominously, in a now-deleted tweet, Haber 7, a pro-Erdogan news outlet, declared, "Hagia Sophia is done! Next is Athens."

The American Center for Law and Justice said they are preparing to fight back and will pressure the international community to take a stand in defending Hagia Sophia.

"Turkey must be given notice that the world will not tolerate the eradication of the Christian faith at the whim of a hostile government," a petition said. "This Christian church must not be erased."