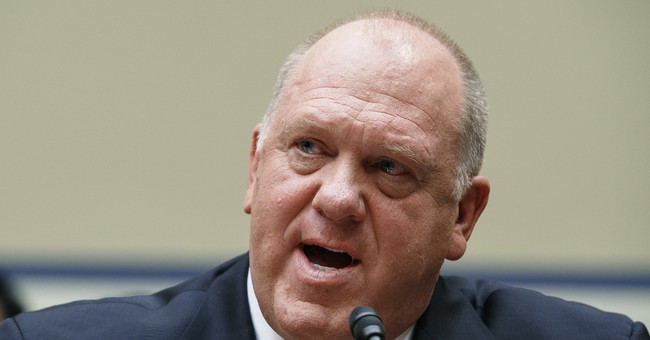 Former Acting Immigration and Customs Enforcement Director Thomas Homan excoriated Rep. Alexandria Ocasio-Cortez (D-NY) for making ICE and CBP out to be the bad guys during a campaign rally for Sen. Bernie Sanders on Saturday.

“Organizing is about tipping people off if you start to see that ICE and CBP are in communities to try and keep people safe,” she said in Iowa.

“I'm not here to reform some of these systems when we talk about immigration. I'm here because Sen. Sanders has actually committed to breaking up ICE and CBP," Ocasio-Cortez continued. "That's why I'm here."

“I’m disgusted,” Homan said on Fox News in response. “She says you want to tip off the community to keep the community safe, that's what ICE is doing.”

“ICE Is keeping the community safe,” Homan added. “She [Ocasio-Cortez] stands up on stage -- first of all, it's an incredibly stupid statement she made, which doesn't surprise me, because she’s about as far from smart as anybody could possibly be, but what she said is dangerous.”

"She's about as far from smart as anybody can possibly be!"

Retired ICE director Tom Homan absolutely eviscerates AOC for her "dangerous" & "idiotic" attacks. She encouraged folks to tip each other off during ICE raids, which ends up protecting, in many cases, violent criminals. pic.twitter.com/IlNOK4isI8

“These men and women put their lives on the line every day to arrest criminals off the streets, especially in New York,” he continued.

“My last year as ICE director, we took 5,000 criminals off the streets of New York. These ICE agents [have done] more to protect the residents of New York than she ever has done or ever will do.”

Homan expressed his disbelief that Ocasio-Cortez would “stand up on stage and make a statement like that and not have any repercussions from the House Ethics Committee,” characterizing her comments as both “dangerous” and “idiotic.”

The former acting ICE director said what Ocasio-Cortez told the crowd is “obstruction.”

“Standing on stage and telling people to give a heads up that the good guys are going to be arresting the bad guys, ICE is in your neighborhood, go run and hide. That's obstruction. That's a crime and she’s standing on stage doing that. She's disgusting,” he said. “Something needs to be done about it.”

He urged her to try to “change the law” if she doesn’t like it but cautioned not to “vilify the men and women of ICE” who are protecting communities across the U.S.

“Maybe she ought to see what it's like to try to console a wife or a child of a fallen officer,” he advised. “It’s disgusting what she said.”