Watch: Biden Loses It on Reporter Who Asks About Bernie Feud 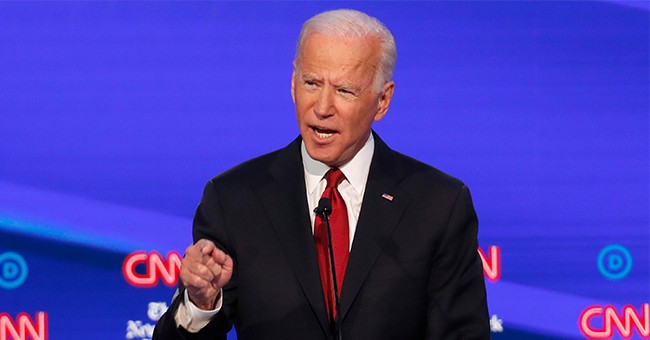 Democratic presidential candidate Joe Biden appeared to lose his patience with a CBS reporter who pressed him about his feud with Sen. Bernie Sanders (I-VT).

Several reporters were following Biden during a campaign event in Mason City, Iowa, when political correspondent Ed O’Keefe asked about why the former vice president seemed to not accept Sanders’s apology after a surrogate wrote an op-ed accusing him of a “corruption problem.”

"Yesterday, you said you accepted Bernie's apology, now you're attacking him. Why are you doing that?" O'Keefe asked as Biden walked away. "Why wasn't this apology enough, Mr. Vice President? Why attack Sanders?"

"You're getting nervous, man. Calm down, it's OK!" Biden continued as he put his hands on the reporter’s shoulders.

"He apologized for saying I was corrupt, he didn't say anything about whether or not I was telling the truth about Social Security," Biden explained.

Before walking away, however, the former VP gave him a light tap on his shoulder with his fist and briefly stared him down.

WATCH: After a campaign event in Mason City, Iowa, @joebiden reacts to @edokeefe's question about his ongoing feud with @berniesanders: "Calm down, it's okay." https://t.co/a2hmMbnjnf pic.twitter.com/ymOMWRR2zP

Sanders said he is “sorry that op-ed appeared” and it is “absolutely not my view that Joe is corrupt in any way.”

“Sometimes campaign staff gets a little ahead of the candidate,” Biden said in response, later adding, “I accept his apology, and I hope we can argue on the facts.”

On the matter of Social Security, however, Biden did not let up.

"I find it amazing that we go back and look at statements and many of them, most of them [are] taken out of context of 10, 30, 35 years ago," Biden said on MSNBC, referring to Sanders and his campaign’s accusations against him on Social Security.

"It's like me going back and pointing out how Bernie voted against the Brady Bill five times while I was trying to get it passed when he was in the House, or how he voted to protect gun manufacturers," he continued. "He's made up for that, he's indicated that was [the] past."

This New Peer-Reviewed Article Could Be a Game-Changer
Townhall
'DOINKS OFF THE CROSSBAR': Justin Tucker hits NFL record 66-yard field goal to defeat the Lions at the buzzer
Twitchy
Pelosi Backs off Monday Vote on Infrastructure, Which May Be the Death Knell of Biden's Agenda
Redstate
FBI Narrative About the Jan. 6th Capitol 'Insurrection' Is IMPLODING
PJ Media