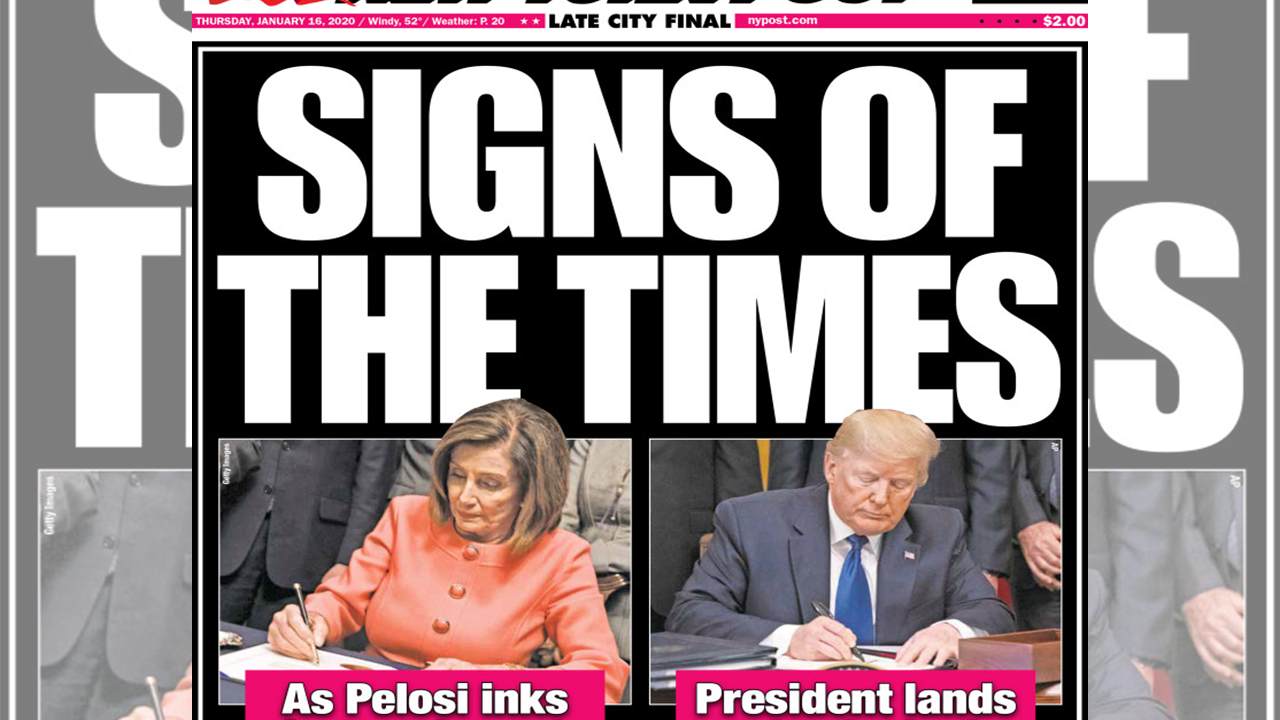 On the left, Pelosi is pictured signing the articles of impeachment against Trump while the president is shown on the right signing a major trade deal with China. “SIGNS OF THE TIMES,” the cover said in large, white print.

Pelosi’s signing ceremony Wednesday showed she was anything but serious about impeachment as she smiled and joked with colleagues and even handed out commemorative pens. The speaker was widely ridiculed for the optics presented in a process she has long claimed to be somber. Even CNN commentators criticized the moment as "jarring" and "off message."

Nancy Pelosi’s souvenir pens served up on silver platters to sign the sham articles of impeachment...She was so somber as she gave them away to people like prizes. https://t.co/RMOiNeoMu0

While President Trump frequently lashes out against the Democrats’ sham impeachment, it hasn’t stopped him from continuing to work for the American people. Wednesday’s signing of a historic trade deal with China was just the latest example. The economy is soaring, the average unemployment rate is the lowest set a record, he reached a deal with House Democrats on USMCA, which the Senate overwhelmingly approved Thursday, and as Marc Thiessen has explained, that’s not all he's accomplished, either.

Trump also reached agreement with Democrats on a spending bill averting a government shutdown. He secured Democratic support on a tax bill that would repeal three Obamacare taxes, including the “Cadillac tax” on high-cost employer-sponsored health insurance — a major win for union workers. And the House approved a $738 billion defense spending bill that would authorize the creation of his Space Force and his parental leave policy for federal workers, while not including restrictions Democrats had threatened on use of defense dollars to build a border wall.

Not surprisingly, the Post’s cover is being touted by Trump’s re-election campaign.

Yesterday @realDonaldTrump signed a historic trade deal with China that will boost U.S. workers, farmers, and the economy.

Democrats fight for unhinged liberals. Trump fights for YOU. pic.twitter.com/sPhSl1UhlY