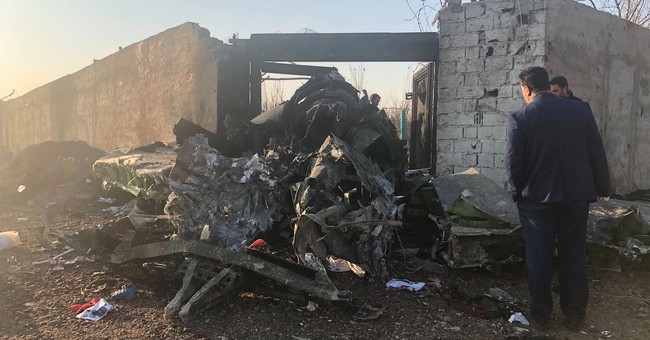 Update: Newsweek reports that Pentagon officials believe the Iranians struck the plane with a Russian-built missile.

Original Story: While officials initially pointed to engine failure as the reason for the Ukrainian passenger jet crashing shortly after taking off in Iran, killing all 176 passengers and crew members on board, that seems to no longer be the case.

According to Oleksiy Danilov, secretary of Ukraine's Security Council, a Russian-made missile is now suspected.

"A strike by a missile, possibly a Tor missile system, is among the main (theories), as information has surfaced on the internet about elements of a missile being found near the site of the crash," he said.

The Tor is a Russian-made missile system. Russia delivered 29 Tor-M1s to Iran in 2007 as part of a $700 million contract signed in December 2005. Iran has displayed the missiles in military parades. (Times of Israel)

Danilov said other causes are being looked into, including terrorism, engine malfunction, or a possible drone crashing into the plane.

Ukrainian investigators who were sent to Iran are still trying to get permission to investigate the crash site.

Questions began to mount Wednesday when Iran would not give the black box to Boeing or the National Transportation Safety Board.

"We will not give the black box to the manufacturer and the Americans,” Ali Abedzadeh, the head of the Civil Aviation Organization of the Islamic Republic of Iran, said, reports BBC News.

And now, they are now reportedly saying the box has been damaged and some of its memory lost.

The plane came down only hours after Iran launched more than a dozen ballistic missiles at U.S. forces in Iraq.

“[T]he priority for Ukraine is to identify the causes of the plane crash," he said. "We will surely find out the truth.”