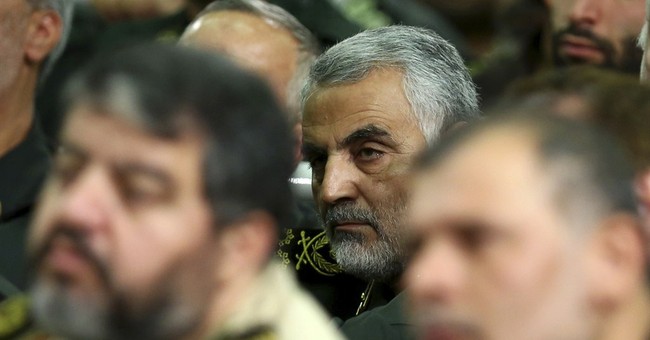 Among the Democratic presidential candidates who have weighed in on the U.S. airstrike that killed Iranian Quds Force commander Qasem Soleimani and Kataib Hezbollah leader Abu Mahdi al-Mohandes, not a single one offered any praise for the move to take out the world's "arch terrorist" -- a man who was responsible for the deaths of hundreds of Americans and according to Defense Secretary Mark Esper, was "actively developing plans" to attack even more Americans in the region.

Instead, the general consensus was to blame President Trump rather than Iran for the danger that exists, calling the operation “reckless” and tantamount to tossing “a stick of dynamite into a tinderbox,”—per Joe Biden, who's been “wrong on nearly every major foreign policy and national security issue over the past four decades” and was a "no" on taking out Osama bin Laden. Others like Sen. Bernie Sanders, Andrew Yang, and Sen. Amy Klobuchar worried it would escalate conflict with Iran and push the U.S. closer to another war, while Sen. Cory Booker lamented that the president “has no strategic plan” to deal with Iran.

My statement on the killing of Qassem Soleimani. pic.twitter.com/4Q9tlLAYFB

Soleimani was a murderer, responsible for the deaths of thousands, including hundreds of Americans. But this reckless move escalates the situation with Iran and increases the likelihood of more deaths and new Middle East conflict. Our priority must be to avoid another costly war.

Trump's dangerous escalation brings us closer to another disastrous war in the Middle East that could cost countless lives and trillions more dollars.

Trump promised to end endless wars, but this action puts us on the path to another one.

We have a president who has no strategic plan when it comes to Iran and has only made that region less stable and less safe. More thoughts: pic.twitter.com/Cn25X4kOhQ

War with Iran is the last thing we need and is not the will of the American people. We should be acting to deescalate tensions and protect our people in the region.

Conservatives pointed out how awful all of these statements are.

If you're a 2020 Democrat admitting you wouldn't have taken out a terrorist who killed hundreds of thousands (including Americans), how can you be asking us to make you Commander in Chief? #Soleimani

For the next week, we get to hear Democrats defend the #1 terrorist on earth.

Trump didn't take out Soleimani for this reason. Consider it a bonus.

Republicans: F-ck yes! (Either loudly or a muted, "Gotta give it to Obummer this time at least.")

Trump order the death of Soleimani.

Democrats: How dare he kill a terrorist!

My liberal friends, what the hell is going on in your party?

Well... we tried your strategy to deter attacks from Iran, and as it turns out...SENDING THEM PALLETS OF CASH DOESN'T WORK.

1. The Democrats who supported billions for the Iranian terrorists who killed hundreds of American soldiers are now attacking Trump for ordering the attack on the top Quds terrorist.

2. Now these Democrats are giving aid and comfort to Iran, our enemy! Is there not one patriot among them?https://t.co/2T94qRRWcd

Even some Democrats pointed out how bad these statements look.

comms advice for Democrats: avoid saying the word "but" after calling Soleimani a murderous war criminal