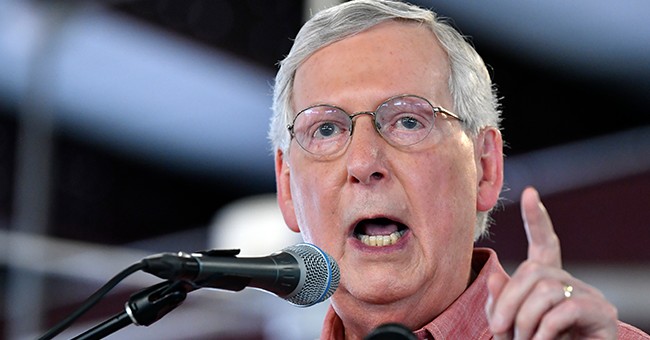 After House Speaker Nancy Pelosi announced Tuesday that she finally reached a deal with the White House over the United States—Mexico—Canada Trade Agreement, Senate Majority Leader Mitch McConnell said he would wait until after the impeachment trail against President Trump is over before bringing the bill up for a vote.

"We will not be doing USMCA in the Senate between now and next week," McConnell said at a news conference on Capitol Hill. "That will happen... right after the [impeachment] trial is finished in the Senate."

MITCH MCCONNELL: "We will not be doing USMCA in the Senate between now and the end of next week. That'll have to come up, in all likelihood, right after the [impeachment] trial is finished in the Senate." pic.twitter.com/S6UhUYKnhp

Fox News reached out to McConnell's office for comment and was told that the Majority Leader does not view his decision as a delay. His office referred Fox News to the rules under the Trade Promotion Authority (TPA), which state that the Senate can take up to 30 days to consider the House bill.

Democrats were livid that, after they delayed the vote for a year, McConnell would delay the vote...by a few days.

"McConnell has no excuse not to bring up the USMCA," said Henry Connelly, spokesman for Pelosi.

Total nonsense. House & Senate passed Korea, Panama, and Colombia Trade Agreements on *the same day* (Oct 12, 2011). Senator McConnell has NO excuse not to bring up the #USMCA. https://t.co/vmkXoSHi9L

“Thanks to President Trump’s leadership, we have reached an historic agreement on the USMCA," U.S. Trade Representative Robert Lighthizer said in a statement. "After working with Republicans, Democrats, and many other stakeholders for the past two years we have created a deal that will benefit American workers, farmers, and ranchers for years to come. This will be the model for American trade deals going forward.”